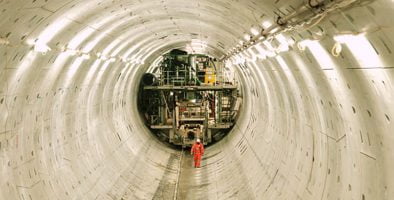 The UK water industry has been granted a loan to go towards the Thames Tideway Tunnel. The European Investment Bank will provide £700 million to go towards the “super sewer”. The Thames Tideway Tunnel is the biggest infrastructure project ever undertaken by the UK water industry and once complete, will help combat the surplus of untreated sewage that flows into the Thames.

The European Investment Bank (EIB) is the world’s largest lender for water-related investment and the backing for the Thames Tideway Tunnel represents the largest-ever loan for water investment worldwide. The 35-year long-term loan from Europe’s long-term lending institution has been agreed with Tideway, the new regulated company set up to design, build, commission and maintain the 25 km tunnel, which will directly control or intercept discharges from more than 30 combined sewer overflow points, stretching from Acton in the west to Stratford in the east.

“We are pleased to support the construction of the Thames Tideway Tunnel, a world-class engineering scheme, delivering infrastructure vital to clean up the Thames.”

Mark Corben, Chief Financial Officer of Thames Tideway Tunnel said: “The EIB’s backing for Tideway is an important vote of confidence in us as a company, as we move into the construction phase. This loan covers a significant proportion of the financing we need to raise. The innovative, index-linked structure enables us to lock-in financing costs, whilst also matching our funding requirements and profiling debt service, in line with the expected growth in our asset base.”

The Thames Tideway Tunnel will be 25km long, with the main tunnel’s outer diameter measuring 7.2 metres. It will have a storage volume of 1.24 million cubic metres and run up to 66 metres beneath London.  Joining up with the Lee Tunnel, it will control, temporarily store and transfer, the excess sewage to Beckton for treatment. In addition to the main tunnel, there will be several connection tunnels.

Rory Stewart MP, Environment Minister, said: “The Thames Tideway Tunnel is a really impressive project. It will improve the quality of the water in the Thames – benefitting fish and wildlife – and all the people along its banks. It will prevent millions of tonnes of sewage flowing into the water.

“It is also an excellent example of investment in the UK’s water sector, supported by financing from institutions such as the European Investment Bank: good value for customers, creating jobs and making the long term infrastructure decisions necessary to protect this great city and our natural environment in the century ahead.”

Lending by the EIB in the UK last year totalled £5.6 billion and supported long-term investment in 40 projects across the country. This represented the largest annual engagement since the start of EIB lending in the UK in 1973, which has supported nearly £16 billion of overall investment.

In the last ten years the European Investment Bank has provided nearly £8 billion for direct investment in London, with additional investment from UK wide programmes.