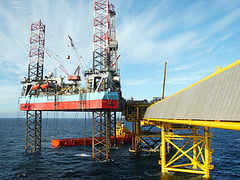 A special ‘well intervention’ ship is on stand by to deliver, via no doubt extremely technical (and presumably expensive) means, the seemingly simple ‘kill’ solution of a mud plug.

The Elgin gas leak, an incident that has necessitated the addition of a brand new navigation button on Total’s global website, was visited on April 6 by a team of Total employees and specialist contractors who assessed how to bring the leaking G4 well under control.

The appropriately named Wild Well Control company said in a Total press statement: “We achieved our goals. Everything went as we would have hoped and the planned well intervention is achievable. There is certainly no showstopper to launch the well control operation”.

The leak was announced on March 25 when 283 workers were forced to evacuate the Elgin process, utilities and quarters (PUQ) platform, located 150 miles off the coast of Aberdeen. At that time, oil giant Shell moved 120 non-essential staff from its nearby Shearwater platform and Hans Deul drilling rig as a precautionary measure due to an expanding sheen of oil condensate.

And while Total describes condensate as “very light oil, like gasoline, that evaporates and is quickly dispersed in the water […] and very easily bio-degraded. Therefore its impact on the environment is quite limited”, we’d prefer that it weren’t floating on the North Sea. And given that the leak is costing Total an estimated £940,000 ($1.5 million) per day in lost earnings, we imagine it would prefer the whole debacle is tackled quickly as well.

Total confirmed that it has commissioned the Skandi Aker for the ‘dynamic kill’ mission. “[Skandi Aker] is our fast intervention well service vessel and she will be quickly on-site. She is being mobilized and we’re ramping up the equipment onboard and adjusting some equipment,” said Michel Hourcard, Senior VP of Development, Total SA, in a conference call update on the incident. The whole operation is costing Total a further £630,000 ($1 million) per day.

In fact, the conference call was in part to placate concerned investors: “We appreciate the level of concern in the market, so let me assure you that we believe we have ample resources to deal with this situation. We have a robust liquidity position with $19 billion of cash and cash equivalents on the balance sheet as of the end of 2011, and we also have undrawn committed credit lines for about $10 billion”, said CFO Patrick de la Chevardiere. Good job Total have been saving for a rainy day…

Meanwhile, a Department of Energy and Climate Change (DECC) spokesman said, “… it is vital that this incident is dealt with in an open and transparent way and the Government welcomes Total’s decision to make this environmental information available on their website”.

The Government has established an Environment Group to share information between officials and industry environmental advisors to ensure that environmental monitoring continues to be integral to the operation, just to make sure.

However, the thought of any degree of wildness from oil or gas wells in our fair seas is a deep concern and one of the reasons Blue & Green Tomorrow so enthusiastically supports renewable energy. As we recently reported on our new micro-blog, a “solar energy spill” is more likely referred to as a very nice day, certainly in the UK (and especially on a rainy bank holiday).

Investing in renewable energy tends not to suffer from the same environmental catastrophes. And it’s sustainable and clean, to boot. Ask your financial adviser for more information about sustainable alternatives, or fill in our online form and we’ll put you in touch with a specialist.

If you are interested in switching to 100% renewable energy at your home or business, we recommend Good Energy.