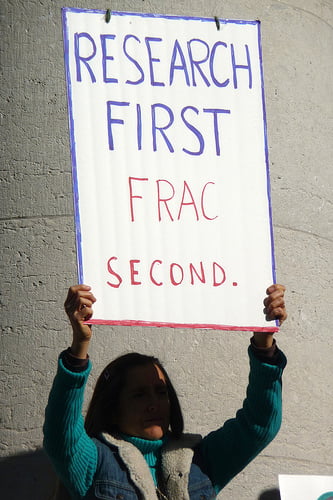 Lord Smith, chairman of the Environment Agency, has given his support to the expansion of the controversial ‘fracking’ method of extracting natural gas from shale rock in the UK.

In an interview on BBC Radio 4’s Today programme, Lord Smith said he believed the controversial method of extracting natural gas could be done safely, despite environmental concerns.

However, he did add that “it has to be drawn out of the ground effectively and safely. That means worrying about the way in which drilling takes place, worrying about making sure the methane is captured rather than being discharged to the air, and making sure that none of the contaminated water gets into the groundwater that sometimes can fill our water supply.

“We would want to monitor and regulate that process very rigorously and we will, wherever it happens.”

Fracking gets its name from the term ‘hydraulic fracturing’ in which fluid is injected into rock layers to release hydrocarbon deposits. An increase in the demand for less expensive ways to increase energy supplies has seen a dramatic rise in the process being implemented worldwide.

However, fracking has been linked with the pollution of underground and surface water supplies as well as causing earthquakes.

Many energy companies believe fracking will lead to cheaper energy supplies but critics fear the risks of the process, which have been linked to two earth tremors in Lancashire.

In April this year, the Department of Energy and Climate Change published an independent report recommending measures to mitigate the risks of earth tremors from hydraulic fracturing. The report reviews a series of studies commissioned by Cuadrilla, whose fracking operations in Lancashire resulted in public debate, and confirms that minor earthquakes detected in the area were caused by fracking.

Ahead of a keynote speech by Environment Agency Chairman Lord Smith at the Royal Society of Arts (RSA), in which he is to give his support to fracking and nuclear power as well as the development of renewable energy, Friends of the Earth’s senior climate campaigner Tony Bosworth said, “Lord Smith rightly highlights the unknown environmental impacts of fracking—until it’s proven to be safe, this technology should be shelved in the UK as it has been elsewhere in the world.

“We know 85% of people want to see more clean British energy, not gas – Ministers should focus on this instead of backing technologies which are unproven or, like nuclear, are consistently late and reliant on vast public subsidies.

“The Government’s plans for the electricity market must ensure that renewable energy fills the gap caused by the closure of power stations and the collapse of nuclear investment – this will boost our economy by creating thousands of new jobs.”

Writing for The Guardian, Lib Dem MP Chris Huhne was realistic about the future and said, “We will need shale gas to compensate for the costly production of declining oil.”

However, his opinion piece about the growing cost of energy in the UK also looked at other areas of the world that use fracking and its impact on the environment.

“The footprint of shale wells is large, and environmental concerns about water pollution have already led to bans not just in France but also in US states like New Jersey and New York.

“Outside the US, mineral rights are usually owned by governments rather than landowners, which means there is less incentive to drill and more incentive to argue “not in my back yard“.

“Many shale-rich areas (China, for example) are short of the water that is essential to the fracking process.”

With so many renewable energy options available to us, investing time, money and resources into risk-prone fracking, whose very name is objectionable, seems foolhardy. Disrupting the very rock beneath our feet to gain access to one resource by blasting in large quantities of another very precious resource—water—all whilst risking contamination of our water supply starts to sound nightmarish.

Supporting truly sustainable sources of energy, such as wind, sun and sea, is the true path to energy security. You can play your part by contacting Good Energy—the UK’s only supplier of 100% renewable energy.