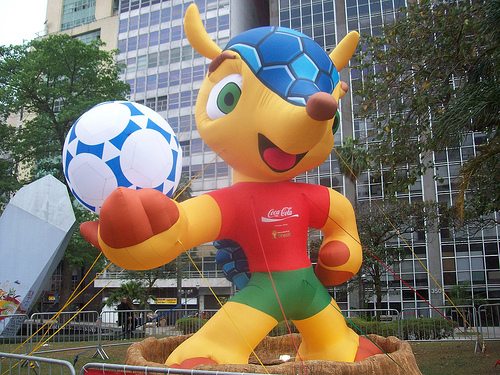 Conservationists and scientists in Brazil have called on football’s governing body Fifa to put more effort into protecting the Brazilian three-banded armadillo that inspired this summer’s World Cup mascot, as the species living in the Caatinga forest is highly endangered.

The armadillo, known in Brazil as tatu bola or ‘armadillo ball’, is a species of armadillo that rolls on itself for protection, resembling a football. It was the inspiration for the Fuleco – a mix of football and ecology –mascot, which was chosen by Fifa as the official mascot for the World Cup, which starts next week.

Fifa chose the animal because “as a member of a vulnerable species, the official mascot can play a key role in driving environmental awareness”. It also donated around £27,000 to the Caatinga Association, which campaigns to protect the species.

However, conservationists and scientists have argued that more of the revenue from merchandise should be invested in conservation, given that the armadillo’s future is under threat because of its fragile habitat in the Caatinga forest.

Enrico Bernard, one of the authors of an article published in Biotropica in April on the urgency to protect the armadillo, said, “The Caatinga is a uniquely Brazilian ecosystem. By acting boldly and swiftly, Fifa and the Brazilian government could help save the Brazilian three-banded armadillo and protect thousands of hectares of its habitat. That would be the best goal scored this cup.”

Rodrigo Castro, executive secretary of the Caatinga Association, said, “The Caatinga suffers intense deforestation because it is a source of fuelwood.

“Besides this, livestock ranching is expanding, the local population is increasing and an activity linked to cultural traditions, hunting, is another factor that has contributed to a drastic reduction of the species.”

Fifa and the government have already met criticism in Brazil because of the enormous budget used to set up the World Cup, while funds in vital areas of education and health are lacking for many citizens.