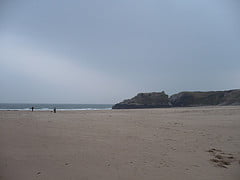 The Marine Conservation Society and Marks & Spencer are teaming up to help clean up Britain’s beaches and protect the seas.

The high street retailer is encouraging its customers to sign up and help out the Marine Conservation Society (MCS) to stop fishing nets, ropes and bottles from polluting the sea and sand. The campaign leads up to the first M&S Big Beach Clean-up, which takes place between Friday, May 11 and Sunday, May 13.

Richard Gillies, director of Plan A, the retailer’s eco programme, said M&S customers care where their food comes from, but the new campaign takes things a step further “this is our chance to get out onto the beaches with our customers and take direct action to help protect marine life and our coastline”.

MCS have held the Beachwatch Big Weekend since 1994, but this year has teamed up with Marks and Spencer in the hope that the collaboration will create a record turnout—meaning more than 5,000 people.

Samantha Fanshaw, MCS chief executive, is “delighted” that M&S staff and customers “recognised the importance of clean seas and beaches and will be joining forces with us in this major event to help turn the tide on litter”.

Even though MCS have been trying to tidy up Britain’s beaches since the early 90s, the amount of plastic rubbish found on the beach is up 135% since 1994. Understandably, Fanshaw says that “litter levels are unacceptably high”.

You might think that much of the litter found on the beach comes from the sea, but, in fact, an MCS report found that 37.4% of rubbish is left by the public, sometimes unintentionally—more bizarre items found include a chess board and a Nintendo DS game.

While sunbathing or swimming with detritus is less than enjoyable the real issue is the damage it can cause marine life. The MCS report highlighted that animals can get entangled in litter or ingest it, which can cause death by starvation or suffocation. The fishing industry also suffers as a result because litter damages equipment and contaminates the catch.

Marks and Spencer is involved in the scheme because it forms part of their Forever Fish campaign, which aims to create a healthy future for fish, oceans and beaches, as well as telling customers about the importance of buying sustainable fish.

Whether we’re on Britain’s beaches or somewhere a little more tropical, it’s important to try and reduce our environmental impact. To find out how easy that can be, take a look at our travel pages.

Supporting companies that take sustainability seriously is a great indirect way of reducing the damage our consumerism does to the environment. We recommend Ethical Superstore, which focuses on supplying eco-friendly products.