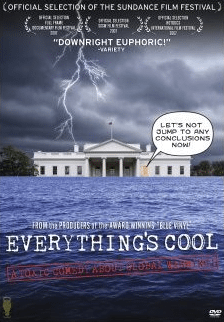 Everything’s Cool is a film about the US’s perception of global warming, highlighting the knowledge gap between scientific understanding and what the general population believes is happening and causing climate change.

The filmmakers take a look at what has been said in the climate debate on both sides and argues that the industry has funded naysayers to support their position. This has left members of the public with conflicting information, often leading to misconceptions, ill-informed opinions and in some cases denial.

The films bills itself as a ‘toxic comedy’ and ‘real-life disaster movie’ and it certainly lives up to this. It follows a group of self-appointed global warming messengers around the US over a three-year period. They attempt to find out why the average person is so distant from the issue and its repercussions and why it is viewed as irrelevant despite the potential catastrophic consequences.

The film is full of information on the subject and offers ideas for how to engage in the issue and with others. It manages to remain light-hearted and interesting whilst still delving into the hard questions about climate change and what it means for the world.

Everything’s Cool is an important and insightful documentary on the relationship between climate change perceptions and politics.