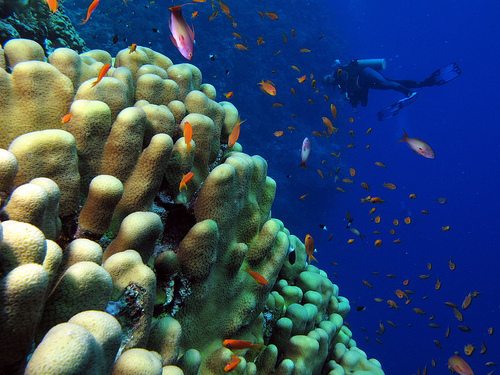 Researchers have discovered that acidification caused by the presence of carbon dioxide (CO2) in oceans makes fish “bolder” and less fearful of predators, potentially disrupting the entire food chain.

The study was conducted by Australian and American scientists on coral reef fish in Milne Bay, Papua New Guinea.

They found that in an acidic environment, caused by a change in the pH of the water, fish change the way they respond to predators.

Alistair Cheal, one of the authors of the study from the Australian Institute of Marine Science (AIMS), said, “We found that living in an acidic environment makes small reef fish become attracted to the smell of their potential predators. Their sense of smell was acutely affected in CO2-rich waters in ways that gravely threaten their survival.

“What we have now also found in our study of fish behaviour in this environment is that the fish become bolder and they venture further away from safe shelter, making them more vulnerable to predators.”

In addition, CO2 in water also affects other species, such as crustaceans, which struggle to form their shells and skeletons.

According to the study, in a rising emissions scenario, the problem could get worse and affect a greater number of animals in the oceans – which absorb around 90% of CO2 emitted.

Hugh Sweatman, a research scientist at AIMS who was not involved in the study, added, “The acidification of the ocean is much discussed because it’s potentially a gigantic thing. It’s the difference between normal water and soda water, if you like.

“Little fish are generally very nervous and stay close to shelter. This reverses this, meaning they are more vulnerable and become eaten more quickly.”

In March, AIMS scientists warned that ocean acidification was putting fish stocks across the world at risk, while a previous report said that oceans were becoming acidic at “unprecedented rates”.