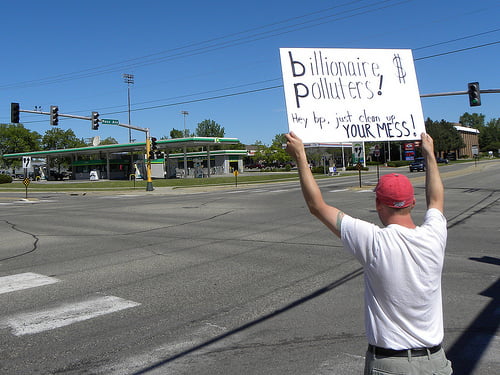 Oil, gas and coal companies across the UK have scrapped all existing exploration projects, saying that they’ve come to the “unified realisation” that their respective industries are significantly harming the planet and that “it’s all starting to seem far too much like hard work“.

Over 100 of the biggest fossil fuel extractors have signed a document called The Fossil Fuel Abatement Agreement (FFAA), that commits each of them to delivering the same amount of energy, but from renewable sources instead.

“We’ve all agreed that what we’re doing is dirty, wrong and unsustainable“, says Colin Shady, head of the UK Fossil Fuel Alliance, the company behind the document.

“After years of digging into the bowels of the earth, we’ve decided that renewable energy is the much more cost-efficient option, both for the economy and the planet.

“We delved too greedily and too deep—I mean, you’ve seen that Balrog thing, right? It’s all starting to seem far too much like hard work”

Two of the biggest names on the list include PB and Turtle—the latter of which is currently under the spotlight for an ongoing gas leak at one of its North Sea platforms.

The news has been cheered by the renewables industry, which has responded smugly to the fact that one of the world’s biggest industry has announced such a wholesale shift in its priorities.

“Fossil fuel companies are turning back from the dark side with their dirty tails firmly between their legs“, quips Jeremy Snow, chairman of the Renewable Energy Group.

“We’re obviously delighted at the news, but it has been a long time coming, so they all have a lot of making up to do.”

“And I’m certainly not fighting the Balrog of Morgoth from the lowest dungeon to the highest peak—they’ll have to deal with that as well“.

The FFAA proffers that all North Sea oil rigs should be converted into massive hydro power plants, whilst coal mines and oil exploration sites should play home to solar and wind projects.

Each of the FFAA signatories are obliged to release backtracking reports stating their commitment to renewables. Blue & Green Tomorrow will obviously be first on the news, so check back for all the latest.

In the meantime, get in touch with Good Energy – currently the UK’s only 100% renewable electricity supplier (and that’s no joke).