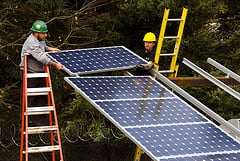 Despite cuts in subsidies for solar power due to come in this month, Germany reports that solar output rose by 60% last year. Charlotte Reid has more.

Germany saw its solar output rise to produce more than 18 billion kilowatt hours of electricity, according to the German Solar Industry Association.

Despite cuts in subsidies for solar power due to come in this month, Germany reports that solar output rose by 60% last year. Charlotte Reid has more.

Germany saw its solar output rise to produce more than 18 billion kilowatt hours of electricity, according to the German Solar Industry Association.

The German Solar Industry Association says that the energy produced is approximately equal to the electricity consumption of the German state Thuringia, meaning Germany’s output could theoretically supply 5.1m households with electricity for a year.

Carsten Körnig, chief executive officer of the German Solar Industry Association, said, “Solar power has become an indispensable ingredient for the success of the energy transformation.

“The solar industry is making good on its promise to radically reduce costs. As a next step, in 2013/2014 we will be able to match the support level of large ocean-based wind farms in initial market segments.

“This is the result of major efforts on the part of industry and research, combined with the effects of tough competition in international markets.”

Blue & Green Tomorrow has previously written about Germany’s love of renewables – one fifth of the country’s power is renewable. But there are other ambitious renewable energy targets that we have previously highlighted.

In January 2012, the German Government cut its solar power subsidies by 15%, and a further 9% will be cut later in the year.

This decision was made in October 2011. Almost the same time that the British Government confirmed that solar subsidies would be halved in the UK.

In the UK, the decision to cut the feed in tariff subsidy has been legally challenged, but in Germany, the industry is working on reducing the costs of solar power to a level where incentives can be phased out.

Körnig is keen to point out that Germany’s solar industry needs “reliable political conditions” at the moment.

He added, “This is indispensable for the continued expansion of renewable energy sources and for maintaining an attractive climate investment in Germany.

“It’s the only way to ensure that the contract between generations contained in the energy transformation will work. And it’s the only way that Germany can continue to be successful in the now highly competitive growth markets.”

If you would like more information about investing in renewable energy and technology then ask your financial adviser. If you don’t have one then complete our online form and we’ll connect you with a specialist ethical adviser.

Alternatively talk to Good Energy to get all your energy from a 100% renewable power company.