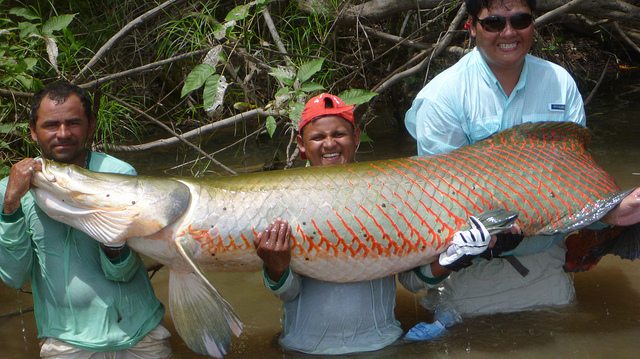 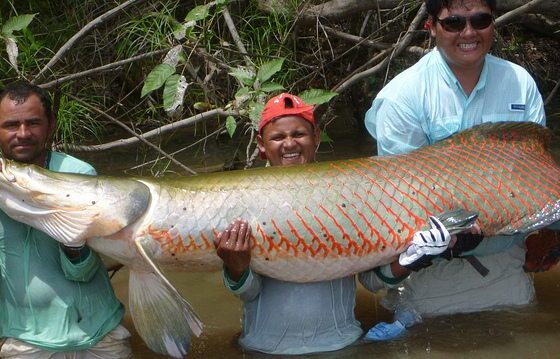 Arapaima, one of the world’s largest freshwater fish, has been fished to extinction in some communities in South America, a new study has found.

The arapaima can grow up to 10 foot long (3m) and weigh more than 28 stone (181kg). Its size, and its tendency to swim near the surface of rainforest rivers, makes the fish an easy target.

The findings of the study, published in the journal Aquatic Conservation: Freshwater and Marine Ecosystems, contradict traditional bio-economic theory, which says such extreme overfishing is unlikely to happen because scarcity of a species would mean costs are driven up.

The study instead supports the alternative “fishing-down” theory that says high value fish can still be fished to extinction.

Lead-author Leandro Castello, assistant professor of fisheries in Virginia Polytechnic Institute and State University explained, “Bioeconomic thinking has predicted that scarcity would drive up fishing costs, which would increase price and help save depleted species.

“If that prediction were true, extinctions induced by fishing would not exist, but that is not what has happened.”

The fish is one of the most overexploited in the Amazon basin. Arapaimas are hunted for food and for its scales, and are popular with locals as they are such large, prize fish.

The researchers looked at numbers of the species in 41 fishing communities, covering 650 square miles of floodplain area. There were also interviews conducted with 182 fishermen. The results are worrying.

Arapaima populations were overfished in nearly all of the areas studied and were found to be extinct in 19% of communities, depleted in 57% and over-exploited in 17%. They were only un-fished in 2% of communities.

The study says this could be happening to a lot of other species, as a lack of research makes it difficult to know the exact state of populations.

“Because tropical regions suffer from widespread illegal fishing and a lack of data, these findings suggest that many similar fishing-induced extinctions likely are going unnoticed”, said Castello

He added, “There is also a lack of economic alternatives for the fishers.”

Stocks are even being depleted accidentally, as young fish are often harvested when fishermen collect other species in nets.

However, the study does say that the implementation of protective regulation means numbers have recovered in some communities.  The study found that, in such areas, the density of arapaima can be 100 times higher than areas where there are no rules.

Fabio De Souza of the Society for Research and Protection of the Environment in Brazil is helping implement community management for the fish in the region.

He said, “There is willingness among fishers to implement management, but our efforts require more support from governmental agencies.”

Overfishing is a huge problem around the world, but there are only limited policies to protect oceans, lakes and rivers.

Only 3% of the world’s marine areas are currently protected. Campaigners have called for nations to commit to protecting up to 10%, to reduce the devastation of marine life.