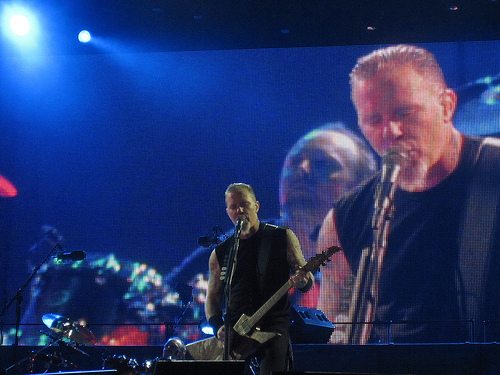 More than 14,000 people have signed a petition calling for Metallica to be removed from the line-up at this year’s Glastonbury festival, because of frontman James Hetfield’s association with bear hunting.

Hetfield narrates the upcoming documentary series The Hunt, which premieres on June 8 on the History Channel and documents the hunting of the Kodiak brown bear.

The History Channel has said about the programme, “Brown bear coexistence with humans on the island is a delicate balance yet is regarded as one of the most successful conservation efforts in the world.”

It added, “Aside from population control management, bear hunting is also vital to the economic viability of Kodiak.”

But campaigners are angry with the band’s association with the activity, saying it is incompatible with Glastonbury’s principles. A Facebook page set up in protest now has 26,000 likes.

The page administrator says, “This is about raising awareness, letting people know and making both Metallica and Glastonbury Festival Ltd aware of what appears to be a large number of peoples (sic) point of view and disapproval.”

The Somerset-based festival, which runs from June 25-29, began in 1970, and Oxfam and Greenpeace have been two of its main beneficiaries since the early-90s.

Ben Williamson, a spokesperson for the UK branch of animal rights group Peta, said, “Some people ‘get it’ when it comes to not contributing to needless pain, suffering and violence, and some people don’t. James Hetfield has a compassion deficit.

“Animals are easy victims, and people who use high-powered weaponry to interrupt their lives are weak people who get a thrill from killing sitting ducks or, in this case, sitting bears.”