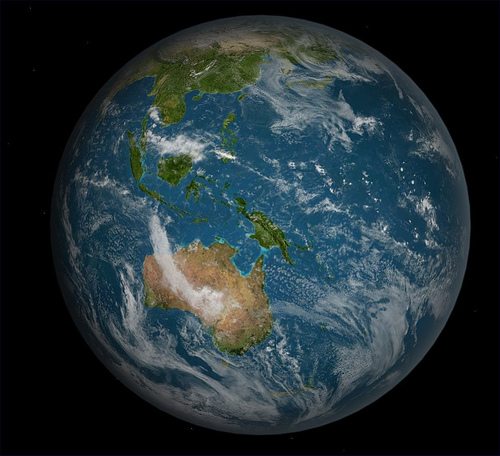 Global carbon emissions are projected to stall in 2015, according to researchers at the University of East Anglia and the Global Carbon Project. Last year global CO2 emissions from fossil fuels and industry grew by just 0.6 per cent – marking a year-on-year slow down. The projection for 2015 reveals a second year of slow growth or even a small decrease in global emissions.

The research reveals that emissions could decline by 0.6 per cent this year. While declines in emissions have previously occurred during periods of economic crisis, this would be the first decline during a period of strong global economic growth.

Prof Corinne Le Quéré, Director of the Tyndall Centre at UEA who led the data analysis, said: “These figures are certainly not typical of the growth trajectory seen since 2000 – where the annual growth in emissions was between 2 and 3 per cent.

“What we are now seeing is that emissions appear to have stalled, and they could even decline slightly in 2015.

“But it is important to remember that our projection for 2015 is an estimate and there will always be a range of uncertainty. In this case, the 2015 projection ranges from a global decline in emissions of up to 1.6 per cent – or at the other end of the spectrum, a small rise of 0.5 per cent.”

The projection for 2015 is based on available energy consumption data in China and the US, and on forecast economic growth for the rest of the world.

Prof Le Quéré said: “The projected decline is largely down to China’s decreased coal use, driven by its economic adjustment.

“Whether a slower growth in global emissions will be sustained depends on the use of coal in China and elsewhere, and where new energy will come from. In 2014, more than half of new energy needs in China were met from renewable sources such as hydro, nuclear, wind, and solar power.”

Prof Robert Jackson of Stanford University who led the Nature Climate Change Commentary, said: “We saw slower global growth in petroleum in2014 and faster growth in renewables. Wind and solar capacities saw record increases in capacity last year and are on track to be even higher in 2015.”

Prof Le Quéré added: “With two years of untypical emissions growth, it looks like the trajectory of global emissions might have changed temporarily. It is unlikely that emissions have peaked for good. This is because energy needs for growing economies still rely primarily on coal, and emissions decreases in some industrial countries are still modest at best.

“Global emissions need to decrease to near zero to achieve climate stabilisation. We are still emitting massive amounts of CO2 annually – around 36 billion tonnes from fossil fuels and industry alone. There is a long way to near zero emissions.

“Today’s news is encouraging, but world leaders at COP21 need to agree on the substantial emission reductions needed to keep warming below two degrees Celsius.

“And despite the slowing of CO2 emissions globally, the amount of CO2 in the atmosphere has now reached 400 parts per million, its highest level in at least 800,000 years.” 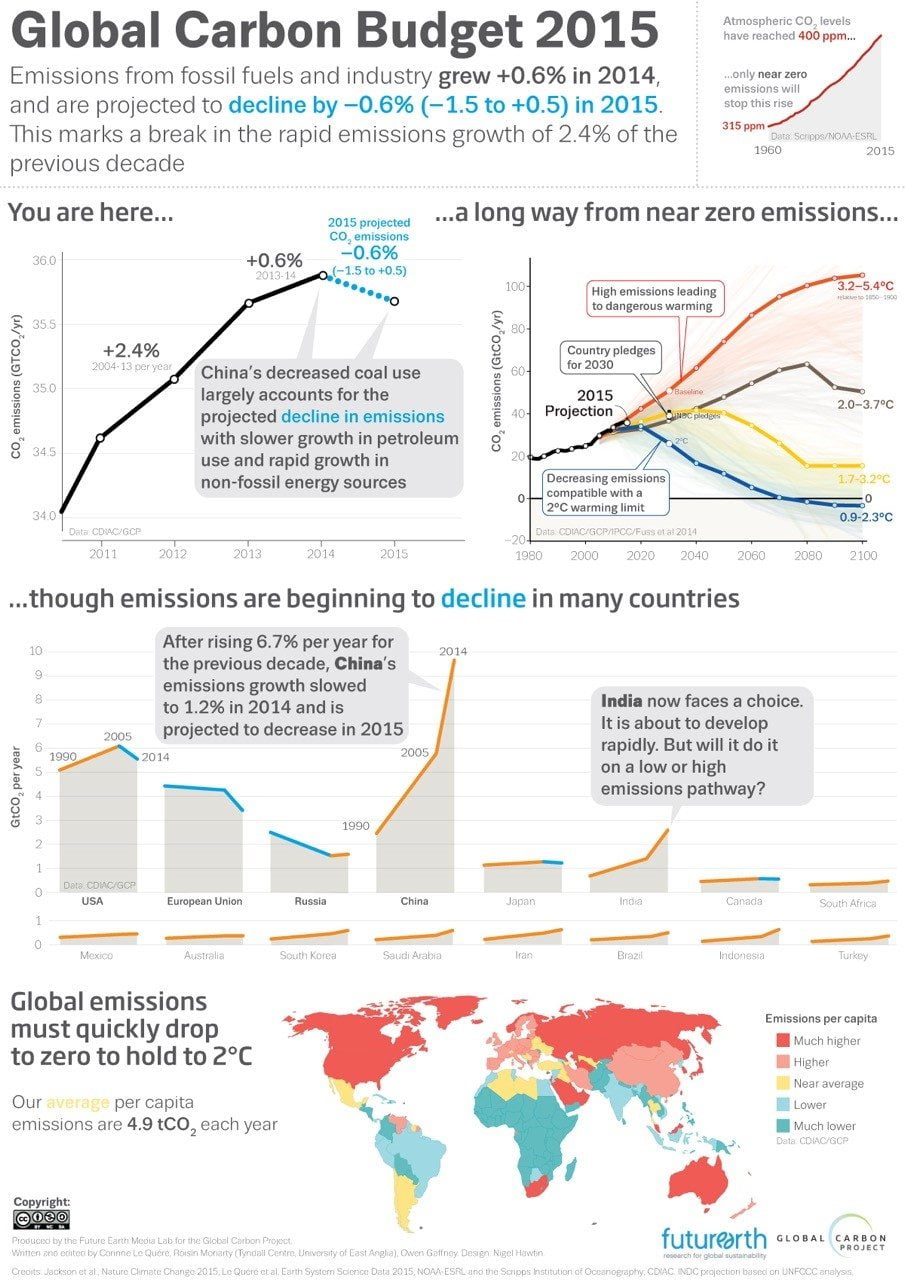 Emissions from china will strongly influence the global emissions over the next decade.

After rising 6.7 per cent per year for the previous decade, China’s emissions growth slowed to 1.2 per cent in 2014 and is expected to decrease in 2015.

China’s decreased coal use largely accounts for the break in global emissions growth in 2014 and 2015.

Emissions in the US have declined by 1.4 per cent annually over the last decade. This decline is projected to continue through 2015.

The US produces 17.4 tonnes of CO2 per capita each year.

The EU is the region with the strongest decline in emissions – averaging 2.4 per cent per year in the past decade.

Although outsourcing of emissions to emerging economies played a substantive role in early reductions, emissions transfers via trade from the EU to China and elsewhere have declined since 2007.

The EU produces 6.8 tonnes of CO2 per capita each year.

India’s emissions today match those of China in 1990.

Per capita emissions continue to be well below the global average at 2.0 tonnes of CO2 each year.

India’s challenge is the need to provide 1.3 billion people with greater access to energy.

If present trends persist, India’s emissions will match those of the EU in 2-3 years.

For global CO2 emissions to peak and decline quickly, part of India’s new energy needs must come from low-carbon technologies.

UK emissions decreased by 9 per cent in 2014 and are now 28 per cent below 1990 levels. Emissions from the consumption of goods and services produced elsewhere has started to decrease, after rising during the period 1990-2007.