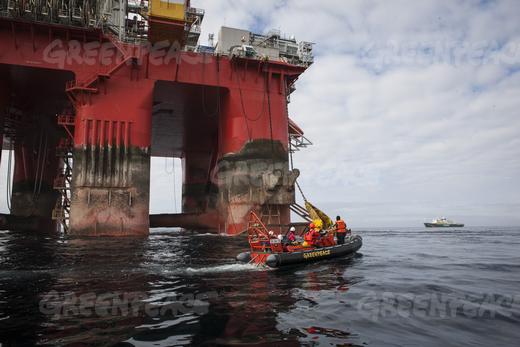 Greenpeace activists are continuing to occupy a Statoil rig in the Barents Sea, despite some having been removed by authorities. The campaign group has said it is determined to prevent drilling from taking place near the vulnerable Arctic.

Fifteen activists from Greenpeace’s ship Esperanza boarded Statoil’s Transocean Spitsbergen oil rig on Tuesday and despite seven of them being removed by Norwegian police, campaigners have said they intend to continue the occupation.

Greenpeace opposes plans by Norwegian oil firm Statoil to drill the site in the Barents Sea, as it said it is very close to Bear Island, an important site for wildlife.

Greenpeace Arctic campaigner Sune Scheller, who was on the Esperanza, said, “We weren’t sure whether to continue this action after two cold days on the rig, but the public support we’ve received has been a huge boost. The Esperanza is a small ship but we are determined to stay on top of this drilling site and stop Statoil from risking Bear Island.

“This company is desperate to present an image of safety, but the world is starting to see the dangerous truth behind its fancy logo. Arctic oil drilling is risky, it is dangerous, and it must be stopped.”

Under Norwegian regulation, oil drilling is not allowed near the ice edge and according to the Polar Institute, this can appear around 25km from the site intended for drilling. Greenpeace has therefore requested the government rejects Statoil’s application and has handed over a petition with over 80,000 signatures to stop the project going ahead.

On Thursday, Norway created a ‘safety zone’ around the rig, which Greenpeace has contested because, it says, it was not given the notice required under international law.