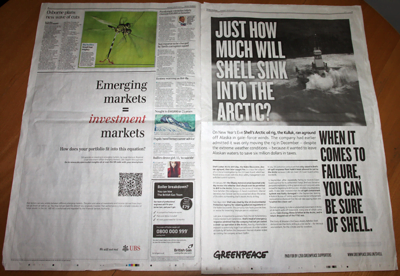 The Telegraph has today published a crowdfunded full-page advert from Greenpeace that attacks oil giant Shell over its exploration activities in the Arctic.

Over 1,200 people pledged money to the environmental group’s cause, which sought to raise £20,000 in order to “expose” Shell to investors, politicians and the public in the financial press.

The oil firm recently announced that it could restart drilling for oil in the Arctic, despite the inherent risks, which were typified by one of its most prominent rigs – the Kulluk – which ran aground in Alaska earlier this month.

The Greenpeace advert asks, “Just how much will Shell sink into the Arctic?” and also says, “When it comes to failure, you can be sure of Shell.”

The campaign against its activities in the polar region is the second time in just over a month that Shell has been targeted by Greenpeace.

This comes after over 40,000 people added their name to a petition that objected to Waitrose’s petrol station partnership with the oil firm in mid-December. Following sustained pressure, the supermarket revealed that any plans to develop its relationship with Shell would be put on hold until after 2013.

Greenpeace expects the anti-Shell advert to appear in The Times tomorrow.