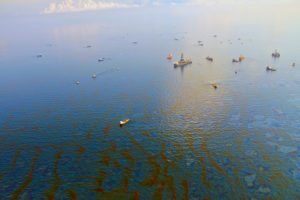 Two of the oil tanks have been breached in the grounded Transocean Winner oil rig grounded off Isle of Lewis according to an announcement from the Maritime and Coastguard Agency. It has been stated that it is ‘unclear at this time how much oil from those tanks has been released to the environment.’

“Leaking diesel oil could create a serious problem for wildlife in such a sensitive area, which is often home to whales, dolphins and important seabirds. The local community is dependent on tourism and fishing, both of which would be badly impacted by a serious spill. Just seven miles west from the grounding site is the EU-protected Loch Roag coastal lagoons, which form a rare and valuable habitat of marine grasses, seaweeds and sponges.

“If the diesel oil leaks into the environment, the clamour for answers as to why such a risky trip was attempted will grow much louder.

Why was the rig taking this dangerous route off the mainland in such a storm? How do we make sure that companies don’t repeat these mistakes?

“Lessons from this incident will need to be learnt, and quickly, with further decommissioning of North Sea rigs expected and climate change expected to create more powerful storms and difficult seas. The rapid reinstatement of the Emergency Towing Vessel that was based at Stornoway could go some way to alleviating the concerns of communities in this area.”