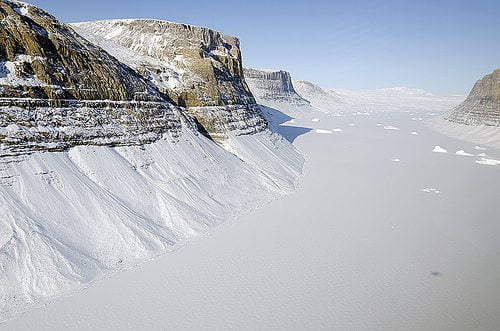 A canyon almost twice as long as the Grand Canyon in Arizona has been discovered buried under miles of ice in Greenland.

It is thought that the canyon was formed around four million years ago, before the region was covered by ice.

Researchers from Bristol University, the British Antarctic Survey and NASA found the canyon when using airborne radar to image the landscape beneath the ice. The discovery was revealed in a study published in the journal Science.

Melt water from the surface of the Greenland ice sheet can flow to the base of the sheet. This water has the potential to act as a lubricant, and speed up the flow of the ice sheet towards the sea.

It is thought that the newly discovered canyon could affect this process by acting as a channel, carrying water from the valley-bed in the centre of Greenland to the edge of the ice sheet and back into the ocean.

Jonathan Bamber, lead author of the study and professor of physical geography at the University of Bristol, said, “With Google Streetview available for many cities around the world and digital maps for everything from population density to happiness one might assume that the landscape of the Earth has been fully explored and mapped.

“Our research shows there’s still a lot left to discover.”

Around 80% of Greenland is covered by the only ice sheet that exists outside of Antarctica. If the sheet were to melt completely, the global sea level would rise by more than 7 metres. Even a partial melting could have disastrous consequences for low-lying countries like Bangladesh and the Maldives.

In July Greenland experienced its highest temperatures since records began, when temperatures of, 25.9C (78.6F), were measured at Maniitoq Mittarfia near Baffin Bay on the west coast.