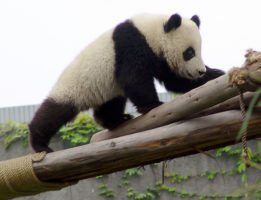 Iain Valentine, Director of Giant Pandas at the Royal Zoological Society of Scotland (RZSS) has released a statement regarding the reclassification.

He stated: “RZSS is delighted to see the giant panda reclassified as Vulnerable on the IUCN Red List, from its previous status of Endangered. This is testament to benefits of a collaborative approach both in the field and through research across the world, something which RZSS helped foster through our Giant Panda Research Symposium at RZSS Edinburgh Zoo in 2013.

“RZSS works closely with our partners the Chinese Wildlife Conservation Association, nine universities and a number of leading NGOs on a total of 40 giant panda conservation projects. In this way, Tian Tian and Yang Guang are part of a much larger conservation success story which is ultimately paying dividends in the wild.

“Whilst this latest news is proof that our approach is working, it is important to remember that the giant panda is not out of the woods, with only 1,864 left in the wild at present. Emerging threats such as climate change and disease will require new and innovative approaches to be adopted, so much still needs to be done if we are to secure the species’ long-term future.”