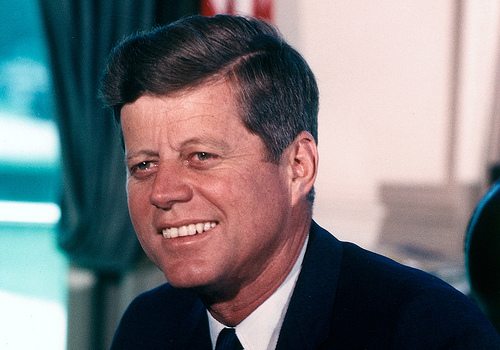 Fifty years ago today in Dallas, Texas, John Fitzgerald Kennedy, 35th president of the United States, was assassinated. His murder shook the world. Whatever his qualities as a man, a husband or a father, his words as president are some of the wisest spoken by any world leader.

Here’s a small selection from some of his most famous addresses:

Without debate, without criticism, no administration and no country can succeed — and no republic can survive. That is why the Athenian lawmaker Solon decreed it a crime for any citizen to shrink from controversy. And that is why our press was protected by the First Amendment — the only business in America specifically protected by the constitution — not primarily to amuse and entertain, not to emphasise the trivial and the sentimental, not to simply “give the public what it wants” — but to inform, to arouse, to reflect, to state our dangers and our opportunities, to indicate our crises and our choices, to lead, mold, educate and sometimes even anger public opinion.

This country cannot afford to be materially rich and spiritually poor. The future of any country which is dependent upon the will and wisdom of its citizens is damaged, and irreparably damaged, whenever any of its children is not educated to the full extent of his talent, from grade school through graduate school.

Third State of the Union address, 1963

So, let us not be blind to our differences. But let us also direct attention to our common interests and to the means by which those differences can be resolved. And if we cannot end now our differences, at least we can help make the world safe for diversity. For, in the final analysis, our most basic common link is that we all inhabit this small planet. We all breathe the same air. We all cherish our children’s future. And we are all mortal.

The effort to improve the conditions of man, however, is not a task for the few. It is the task of all nations — acting alone, acting in groups, acting in the United Nations, for plague and pestilence, and plunder and pollution, the hazards of nature, and the hunger of children are the foes of every nation. The Earth, the sea, and the air are the concern of every nation. And science, technology, and education can be the ally of every nation. Never before has man had such capacity to control his own environment, to end thirst and hunger, to conquer poverty and disease, to banish illiteracy and massive human misery. We have the power to make this the best generation of mankind in the history of the world — or to make it the last.

What Robert F Kennedy, who was assassinated after JFK, said of his brother in 1966:

But if there was one thing that President Kennedy stood for that touched the most profound feeling of young people around the world, it was the belief that idealism, high aspirations, and deep convictions are not incompatible with the most practical and efficient of programs — that there is no basic inconsistency between ideals and realistic possibilities, no separation between the deepest desires of heart and of mind and the rational application of human effort to human problems.

We do these things because they are hard