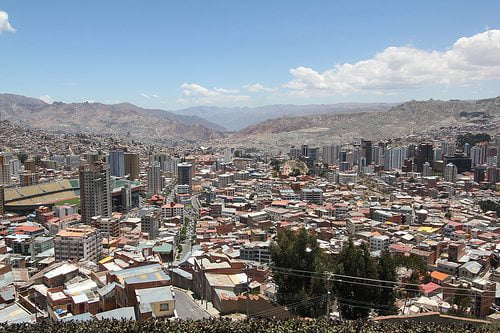 The year is 2000 and Jan Levy is in Bolivia. A year into his MBA course, he had become disillusioned.

Fed up of the share price-obsessed budding bankers and consultants, he had made the trip to South America in his summer break to do some volunteering.

He is standing looking down on the capital La Paz, home to nearly 900,000 people. Some 3,650 metres above sea level, the city sits in what looks like a giant crater beneath the Altiplano, a vast plain 4,000 metres high.

Its central business district, with its skyscrapers and shiny buildings, stands out like a sore thumb. But what struck Levy as he surveyed the sprawling urbanisation were the bits outside of the thriving economic hub.

He saw the community, the poverty, the shacks. As the city had expanded, its modest new houses had been built on hillsides, packed in like sardines to make the most out of the usable land.

For Levy, La Paz served as a graphical representation of business and society – and the disconnection between the two.

He returned to Barcelona’s IESE Business School to complete the remaining year of his two-year MBA. His Bolivian experience had changed his outlook, and he set about putting together a business plan.

His idea – which would later in his career turn out to be very useful – was around a concept of employee volunteering. He wanted to make it strategically important, and to turn it into a leadership development experience.

This led him to Business in the Community (BITC), the membership organisation that specialises in social change. He then met Simon Hamilton, the founder of the consultancy Three Hands, which he soon joined.

Fast forward to the present day, Levy is still with Three Hands. It has grown from one man working in his attic, to two men working in their attics, to what it is now – a healthy small business.

The firm specialises in community engagement. It helps its clients – generally big corporates like British Gas, Sky, IBM and Lloyds Banking Group – revive their place in society. It’s about reminding them of their core purpose.

“It’s not always obvious to the public what businesses are doing”, Levy says.

The benefits of being actively engaged with communities are huge – none more so than employee development. A successful business has a motivated, inspired workforce; and a workforce becomes motivated and gets inspired when they are given opportunities to do great things and feel they are part of something special.

Levy uses the example of a big insurance firm which he was working with to help it better understand its underserved markets. Three Hands set up a project for a group of people in the company’s communications department to spend two days with a charity that specialises in helping ethnic minorities on low incomes.

“From that, they got a real feel about how they could possibly engage that kind of demographic in the future and what their needs are”, he says.

Some call it sustainability; others call it corporate social responsibility – or CSR. But Levy calls it helping companies serve a social purpose – and not just a financial one.

That said, there is evidence to suggest that those companies with well-formed approaches to CSR do perform better. One study, by academics in the US, said in January that investors who focused almost exclusively on a business’s financials estimated its fundamental value to be around 25% higher when a firm had a strong CSR record.

Meanwhile, 93% of CEOs surveyed by Accenture said they see sustainability as important to their company’s future success.

To those who say CSR – as a term or a concept – has passed its sell-by date, Levy says, “I don’t think it has. What’s confusing is this morphing from CSR to sustainability, but I don’t think we should get hung up on terminology.

“With sustainability evolving almost as a new era of business, I think CSR and community is actually more relevant than ever.”

This belief is one he learned 14 years ago while standing overlooking La Paz, Bolivia’s city in a bowl, and one that could be vitally important in reconnecting business with its historical, socially-orientated roots.

Nothing ‘soft and fluffy’ about sustainable business