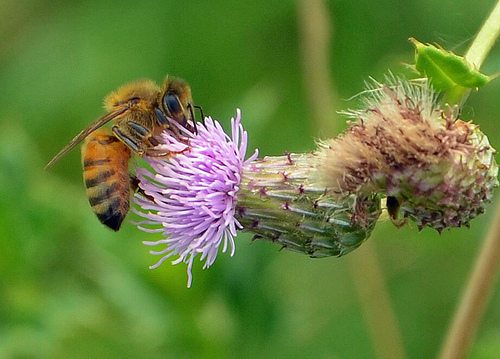 The UK has too few honeybees and faces food security issues in the future as a result of this lack of pollinators, a new study has found.

The research reveals that honeybees provide only a quarter of the pollination needed in the UK – the second lowest level in Europe after Moldova.

It says that across all 41 European countries, there has been a general improvement in the number of honeybee colonies – increasing by 7%.

However, the growing demand for biofuels has put enormous pressure on pollinators. The result is that the number of honeybees is too low to provide a pollinating service to the vast amount of crops grown for food and energy.

These are often pollinated by wild species, such as bumblebees and hoverflies, but their numbers are either also declining and or not accurately monitored.

Lead researcher Simon Potts from the University of Reading said the EU was failing to predict the consequences of biofuels crops.

“There is a growing disconnection between agricultural and environmental policies across Europe”, he said.

“Farmers are encouraged to grow oil crops, yet there is not enough joined-up thinking about how to help the insects that will pollinate them.”

Although the ban on neonicotinoids pesticides – found to be harmful to bees – became effective in December, the researchers argue that the EU needs wider policy reforms to increase the number of pollinators.

“We need a proper strategy across Europe to conserve wild bees and pollinators through habitat protection, agricultural policy and farming methods – or we risk big financial losses to the farming sector and a potential food security crisis”, Potts said.

“We face a catastrophe in future years unless we act now. Wild pollinators need greater protection.”