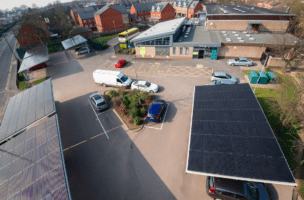 This puts Nottingham top of all the core cities – the largest cities in the UK outside London – with the greatest reduction in emissions and the lowest emissions per person. Nottingham is now producing almost three tonnes less of CO2 per year per person than it was in 2005.

Councillor Alan Clark, Nottingham City Council’s Portfolio Holder for Energy and Sustainability, said: “It’s a great achievement to have met this important target four years early. Nottingham is at the forefront of sustainability awareness and these latest figures maintain the city’s position as the UK’s most energy self-sufficient city.

“Data shows that since 2011-12 there has been a significant fall in the city’s carbon emissions due to a reduction in domestic energy use. This coincides with our programme of energy saving investments in social housing such as external wall insulation programmes which have also been open to private owners and the installation of solar panels on over 4,000 of council house roof tops.

“There has been a real move towards sustainability in the city with a wide range of organisations in the public, private and voluntary sectors carrying out vital work to reduce our environmental impact. Beating our target is a fantastic recognition of the efforts across the city to achieve this aim.”

Councillor Nick McDonald, Nottingham City Council’s Portfolio Holder for Business, Growth and Transport, added: “A significant part of this reduction – around 13% – is due to the popularity of public transport, cycling and walking in Nottingham. We have Europe’s largest fleet of electric buses, the addition of the new Chilwell and Clifton tram routes and £6.1m invested in improving cycling routes to provide great alternatives to using cars to get around the city. We are also proving to be very successful in getting government funding to introduce innovative low emission transport options – electric charging infrastructure, all-electric buses, electric taxis, gas-powered buses and improved travel planning for businesses and their staff. The result is that we are continually reducing the environmental impact of transport in Nottingham.”

Nottingham-based EvoEnergy has been working with the local authority since 2011, when it installed a large number of solar PV systems on social housing. Most recently, Nottingham City Council has worked with EvoEnergy to deliver a number of larger installations on commercial buildings including two of the UK’s biggest solar carports at Harvey Hadden Sports Village (67 kWp) and Ken Leisure Centre (88.5 kWp). A 133.65 kWp system has also been completed at Nottingham Wildcats stadium, saving the grassroots sports club more than £3,000 per year on energy bills.

Stephanie Machin, National Account Manager at EvoEnergy, said: “We’re proud to have contributed to this fantastic achievement, with a number of domestic and commercial solar installations across the city. It is widely believed that Nottingham has the highest percentage of solar panels per household in the country, standing at around 4,000 domestic installations – so the city is really leading the way when it comes to this type of renewable energy!”