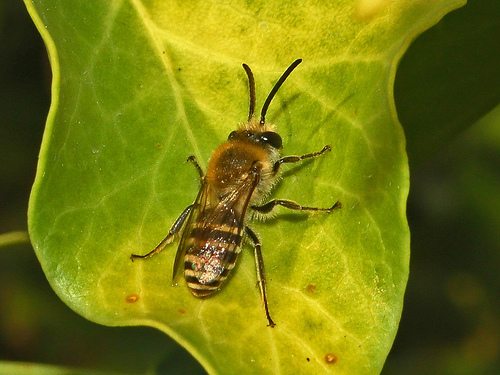 A species of bee rarely seen in the UK has been found nesting in an Oxfordshire business park.

It’s thought that the ivy bees, nesting in sandy soil near Howbery Business Park, are the most north they’ve been in the UK since appearing in Dorset in 2001.

Alan Brampton, who made the discovery, told ITV News, “The typical honeybee isn’t active at this time of the year which is why I took a closer look at the colony of bees. The ivy bees are a rare species for the UK.”

The discovery comes after the short-haired bumblebee, which was declared extinct in 2000, was found to have begun nesting at the Dungeness reserve in Kent, as part of a reintroduction plan by the RSPB.

At the time, Nikki Gammans of the RSPB described the news as “a milestone for the project and a real victory for conservation.”

The ivy bees, or colletes hederae, are mainly found in continental Europe. They principally take pollen from the ivy plant, hence their colloquial name, and generally opt for sandy soils or soft rock to nest in, rather than large colonies like other species. The bees in Oxfordshire had chosen a landscaped bank made of sand.

A North Yorkshire-based egg producer, Chippindale Foods, recently joined forces with a leading bumblebee charity, the Bumblebee Conservation Trust, in an effort to make its farm more bee-friendly and prevent further population decline of the species.