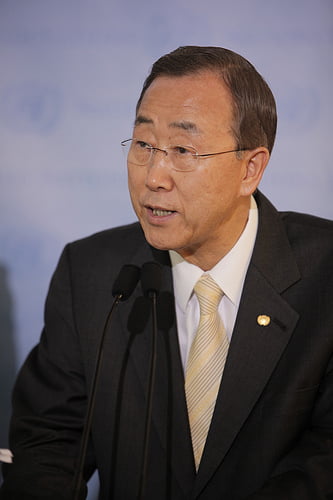 United Nations secretary-general Ban Ki-moon has highlighted peace and security as a “critical ‘fourth dimension’ for sustainable development” in his message for the International Day for Preventing the Exploitation of the Environment in War and Armed Conflict.

The annual event, which began in 2001, aims to recognise the impact that wars have – not only on soldiers, civilians and cities – but also on the environment.

“The environment has often remained the unpublicised victim of war. Water wells have been polluted, crops torched, forests cut down, soils poisoned, and animals killed to gain military advantage”, the UN explains.

A 2010 report by the United Nations Environment Programme (UNEP) called Environmental Scarcity and Conflict found that the cause of 40% of civil wars since 1950 can be attributed to the exploitation of natural resources such as oil, timber, gold and even water. It adds that since 1990, at least 18 violent conflicts derive from this kind of dispute.

“War and armed conflict shred the fabric of sustainable development”, said UN secretary-general, Ban Ki-moon in his message to mark the day.

“No conflict-affected country has yet achieved a single millennium development goal (MDG).  As we look beyond the 2015 MDG deadline, we must recognise peace and security as a critical “fourth dimension” of sustainable development.”

Ban, “There can be no peace if the resource base that people depend on for sustenance and income is damaged or destroyed – or if illegal exploitation finances or causes conflict.”

David Cameron travelled to Dubai at the weekend in order to reinforce Britain’s defence relationships with a number of Arab states. However, the prime minister is also said to have made the trip to sell more than 100 fighter jets to Middle Eastern governments in a deal worth £6 billion.

Critics have questioned Cameron’s timing – a day before today’s annual event and on the same day that Iran and Israel held “positive” talks in Brussels about non-proliferation.

Ann Feltham of the Campaign Against Arms Trade (CAAT) said the prime minister was “undermining [human rights] by promoting arms sales to the authoritarian regimes of Saudi Arabia and the United Arab Emirates”.

In 2006, Kofi Annan, Ban’s predecessor as secretary-general, made a speech to mark the International Day for Preventing the Exploitation of the Environment in War and Armed Conflict that included some recent examples of environmental destruction caused by war.

The conflict between Israel and Hezbollah, he said, released some 15,000 tonnes of oil into the Mediterranean Sea, affecting 150km of coastline in Lebanon and Syria.

To put that in perspective, the BP Deepwater Horizon disaster – widely regarded as one of the worst environmental disasters in history – saw 20m gallons, or 62,000 tonnes, of oil spill into the Gulf of Mexico.

Whilst the fatalities of the Lebanon War got much coverage, the environmental damage was barely mentioned.

Meanwhile, in his speech this year, current secretary-general Ban highlighted a case study of Afghanistan, where a trillion dollars’ worth of mineral deposits could lead to civil conflict.

“In the eastern Democratic Republic of Congo”, he added, “rich reserves of tin, tantalum, tungsten and gold that could be used to raise standards of living for millions of people are instead being used to finance armed groups and prolong violence.

“And throughout Africa, elephant populations are being decimated to feed the global illegal ivory trade, which in turn is funding rebels, criminal networks and other destabilising forces.”

He ended with a call to end conflict and violence over natural resources, and to sustainably maximise their financial benefits instead – all the while building and maintaining peace.