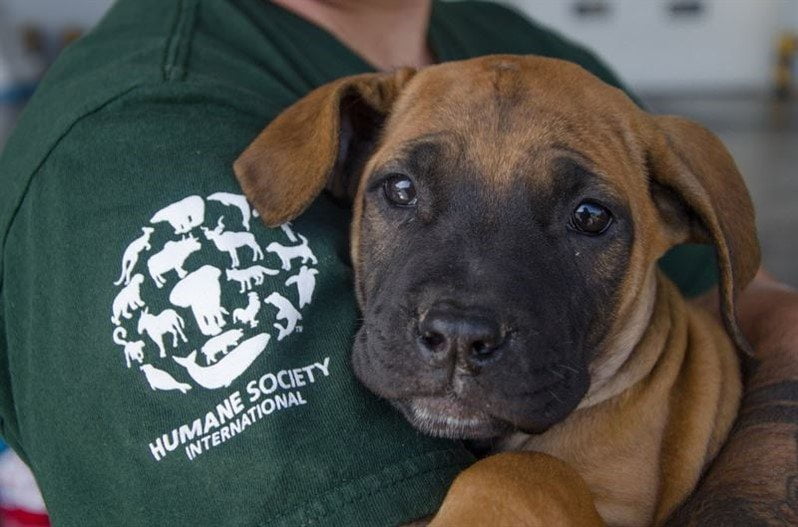 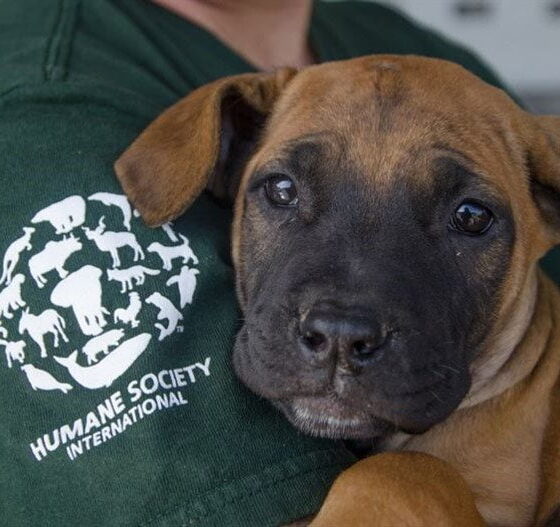 Ten adorable puppies and their mothers have been flown to a safe new life in the USA, thanks to a rescue team from animal charity Humane Society International who saved them from certain death on a South Korean dog meat farm.

The puppies are part of a rescue mission that began in late September that saw HSI close down the dog meat farm and rescue all 103 dogs from death row – the newborn puppies were too young to fly with the others, so they stayed behind with their mums in foster care in Seoul until late last week when HSI returned to bring them home.

HSI’s Adam Parascandola and Lola Webber were on site for the former dog meat farm to be completely demolished, and to prepare the puppies and their mums for their flight to a new life in the USA where they will be adopted into loving forever homes.

HSI’s Lola Webber said: “Visiting these dog meat farms never gets any easier, and so it fills my heart with joy to know that these puppies have been spared a life misery, and instead will live lives of love and freedom and compassion, so different to the life of suffering and death that awaited them before we closed down the farm. It is so satisfying to know that they- unlike the countless litters of pippies before them- will not spend their days in barren cages, hungry and scared.

“They will fly off to live the happy lives we wish for all the dogs caught up in the cruel dog meat industry, as cherished family members. But even as we see these puppies and their mums leave, we’ll be thinking about the countless others still suffering on farms. We have a long road ahead of us but we are determined to end this cruelty.”

Humane Society International signed an agreement with Farmer Kim who owns the farm, to close down his dog farm in Chungcheongnam-do for good and switch to a humane, non-animal trade instead. This is the third such dog farm closure by HSI as part of its campaign to end Asia’s cruel dog meat trade. More than 2 million dogs are bred and killed each year for their meat in South Korea. In China and elsewhere most dogs are stolen from the streets, but in South Korea they are bred on small and largescale farms. Through working hand in hand with dog meat farmers to close their businesses, HSI hopes to demonstrate to the South Korean government that a nationwide phase-out and ultimate ban on the production and sale of dog meat is an economically-viable and desirable strategy. With the Winter Olympics coming to South Korea in 2018, there is a key window of opportunity to rid the nation of this inherently cruel industry before the world’s media spotlight falls.

The dog meat trade is inherently cruel. In all the farms that HSI has encountered over the years, we have seen a mixture of dog breeds from large mastiffs to tiny Chihuahuas, all spending their entire lives in small, filthy cages waiting to be killed for human consumption. The dogs are commonly killed by electrocution, often in front of each other.

HSI returned to the former dog meat farm in Chungcheongnam-do to raise the farm to the ground. All of the dog cages were dismantled, never again to imprison an animal. And the rest of the farm facilities were destroyed, as HSI and the farmer looked on at a job well done. Farmer Kim is glad to draw a line under his involvement in this business that he confessed brought much family and community shame.

HSI’s Adam Parascandola said: “Pretty much all the dog meat farmers we’ve spoken to and worked with have been keen to get out of the dog meat trade. It’s a highly sensitive issue in South Korea, laden with societal shame despite the fact that a regrettably high proportion of citizens still eat dog meat in the mistaken belief that it has health properties. But in the same way that we campaign to educate people in China and Vietnam that rhino horn has no medicinal benefit, so too must the myth about dog meat be dispelled.

There are thousands of dog farms in Korea, so we know full well that HSI doesn’t have the capabilities to close down every one ourselves, that’s not the goal. The goal is to show the government that closing them down and transitioning these farmers to other trades, is entirely possible. We want to encourage the government to present farmers with the solution they themselves are keen to see take place.”

Many South Koreans mistakenly believe that dogs bred for meat are somehow different from other dogs. But, we have seen time and time again that, despite their ordeal, these dogs are for the most part friendly and desperate for human affection, their tails wildly wagging as HSI comes to open their cages and cut their chains.

HSI will be launching public awareness campaigns to encourage South Koreans to think differently about “meat dogs”, who are no different to the pet dogs that a growing number of Koreans are welcoming into their homes as companions. While dog adoption is not yet widely established in South Korea, HSI hopes to see that change in the future by building a community of citizens who adopt former farm dogs into their homes and help fellow South Koreans take them into their hearts.