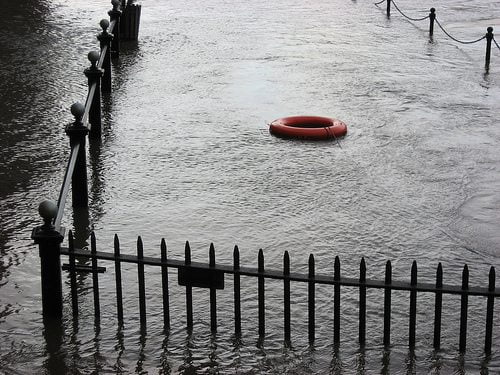 The UK government’s claims that it is spending more money on flood defences than ever before are incorrect, environmental campaigners have said.

While just under 100 flood warnings remain in place across the UK after a prolonged period of extreme weather and heavy flooding, the government’s commitments to flood defence funding has come under scrutiny.

Friends of the Earth has compared statements from environment secretary Owen Paterson with those of his department and ministerial colleagues, and of prime minister David Cameron, and has questioned whether Paterson is giving parliament the full picture.

On Sunday, Cameron said that his government was spending £2.3 billion on flood defences over four years; a figure he insisted was higher than that from the previous four-year period.

However, the government’s own figures reveal that more was spent under Labour’s budgets between 2007-11. When inflation is factored in, flood defence spending has undergone a real-terms cut.

“[Paterson’s] department and his fellow Department for Environment, Food and Rural Affairs minister George Eustice have conceded that the only conceivable way this claim stacks up is to include money from other hoped-for sources like cash-strapped local authorities and businesses”, explained Friends of the Earth climate campaigner Guy Shrubsole.

Speaking to the BBC on Monday, Eustice said that the increase Paterson described took into account “what we’ve managed to lever in from local authorities.”

In July, a committee of MPs criticised this “partnership model” for funding flood defences, “since the approach has secured very little to date”, and complained that funding has not kept pace with an increased risk of flooding caused by increasingly frequent severe weather events.

He added,“The government has actually cut its flood defence spending and it is astonishing that the struggling environment minister continues to stand up in parliament to trumpet that ‘this government is spending more than ever before’.”

Paterson has never been far from controversy over past months. In October, he was criticised for attending only two official briefings on climate change during his tenure and provoked bemused responses when he claimed climate change could be beneficial for the UK.