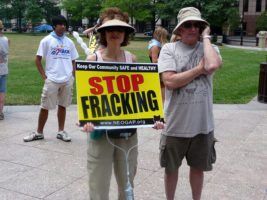 Friends Of The Earth and local communities in Lancashire are set against the decision by the government to allow fracking to go-ahead at Preston New Road.

Secretary of State Sajid Javid, has decided that fracking should go ahead at Preston New Road, Lancashire, but has delayed making a decision on the Roseacre site to “give the Appellant and other parties the opportunity to provide any further evidence on highway safety and allow parties to make any representations on that before reaching a final decision on this appeal. ”

While the decision on Roseacre has not yet been finally made, the letter released from CLG this morning states that he “is minded to allow Appeal C and grant planning permission, subject to conditions”.

“If fracking goes ahead in Roseacre, it would devastate our community. We are allowed to make decisions over wind turbines or solar farms, which have far less impact, but not fracking.

“We are not scaremongers, just concerned residents. These are totally inappropriate greenfield sites, situated in the very heart of rural Fylde, for an industry of this nature.

“So much for our government saying they want local people to have control over their own destiny. Even our own MP urged his own ministers to respect local decision makers.

So much for our government saying they want local people to have control over their own destiny.

“We will continue to work with our friends at Preston New Road, and other threatened communities, to stop fracking from happening. It has been a David and Goliath battle. Unfortunately we don’t have the resources of Cuadrilla and the oil and gas industry.

“Fracking is not the solution. It is a backward step in energy policy. Ours is a small and densely populated country, unlike the wide open spaces of the US, which cannot support such an industry without devastating results. Be assured this is about money not people.”

“This is bad news for Lancashire – the community have been fighting fracking for more than five years. This fight continues until this unproven and unpopular industry disappear for good.

“Instead of shoving us down a dangerous path that inevitably leads to climate change, the government should invest in renewables and energy efficiency, an emerging industry that could create 24,000 jobs in the north west alone.”

Friends of the Earth will be looking closely at this decision and we continue to support the community in their campaign to make sure all of Lancashire stays frack free. Only 19% of people support shale gas compared to 81% support for renewables.