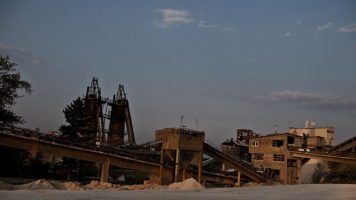 Demand for sand is higher than ever before; it is currently the most consumed resource after fresh water. Just like our other treasured and overstretched resources, our finite supply of sand is running out.

The insatiable, unsustainable appetite is forcing up prices and rates of sand theft across the globe. These so called ‘Sand wars’ are the culmination of demand and competition for the resource. In order to minimise environmental damage and curb illegal sand trades, we need to find better extraction practices, or even better, a new sustainable replacement.

Exponential demand for sand in construction

By 2050, an estimated 66% of the rapidly growing global population will live in urban areas. In order to accommodate some 9 billion of these future urbanites, construction is already well underway, not just of buildings and cities, but of entire new islands. In order to make this happen, we need a vast amount of sand.

Needless to say, sand is a billion dollar international market. Countries such as Dubai, who have already emptied their marine sand supply, rely on imports from other countries to fuel their economic growth. Alongside the Asian construction boom, one of the newest, most serious competitors in the fight for sand is the hydraulic fracturing industry.

America is among the top countries in the world who could uncover a significant supply of fossil fuels from fracking. It is, however, a highly controversial method of mining, partly due to the huge quantities of water and sand the process requires.

The USGS also showed the amount of sand used for a single fracking well has risen from 900 tons up to 5,000 tons in the last 7 years, with many companies working on the principle that more sand means more oil. It is not, therefore, surprising that the price of sand has skyrocketed.

The US may be the leaders in frac-sand consumption but those figures are dwarfed by the level of sand consumed by Asia. Expanding megacities saw China’s demand for cement go up by 437% in the past 20 years, while Singapore is recognised by the UNEP as the world’s biggest importer of sand.

Towers of glass and cement continue to spring up on skylines across the world. They have become a badge of progress for developing countries – as have their giant construction sites. Emerson Cranes point out that London’s skyline is punctuated with tower cranes and scaffolding. As well as being a visual marker of prosperity, these sites also create growth by creating thousands of jobs within the construction industry.

Sand is the foundation for all of these giant building projects, without it, construction and subsequent economic growth would be severely stunted.

Another sand consuming trend in Asia that has been draining resources since the 19th century is “reclaiming” land from the sea, building new islands and dramatically expanding coastlines.

A colossal $40bn Chinese development project taking place this year is Singapore’s Forest City. This new urban island will be created using phenomenal amounts of sand from all over the world. Neighbouring countries such as Malaysia and Indonesia have refused to continue selling sand to Singapore as entire islands are vanishing before appearing again as part of Singapore’s swelling coastline.

The complicated politics of international sand trade and its soaring prices has, unsurprisingly, resulted in some deeply unpleasant environmental, economical and social consequences.

This consumption is causing environmental damage and criminal activity

Collecting sand for use in construction is not as simple as going one of the vast deserts of the world to load up a fleet of cement mixers. In fact, desert sand has no commercial use in construction as the grains are too fine. In order to acquire sand of the right consistency, more invasive, aggressive methods of extraction are required.

Both coarse and strong, sand ideal for building development is the product of thousands of years of gentle erosion by water. Rock segments are sculpted as they travel through the world’s water bodies, delivering precious granules straight onto our shores.

Coastal and riverside areas, therefore, become the target for sand mines, legal or otherwise. Removing sand destroys surrounding ecosystems and infrastructures as well as intensifying problems such as coastal erosion, flooding and pollution.

In the UK, there are many conservation measures in place to try and protect the landscape and wildlife from excessive dredging. Other companies are able to avoid environmental damage through using Earth observation, which is becoming increasingly valuable for many sectors including energy. As Earth-i state, satellite data in energy and natural resource projects can assess the impact on the wider environment and ensure regulatory, operational and environmental support.

India is host to the most prolific battles over territory for sand mining. “Sand Mafias” seize land and control trade through violence and bribery. Their presence has devastating effects on local communities as wells dry up and agricultural development is forced to a standstill.

Last year, Wired released an article titled The Deadly Global War for Sand which revealed some of the horrifying extremes sand cartels are reaching.

Gangs descend on beaches with hundreds of trucks and take away entire stretches of coastline to be sold on the black market. Despite the severe impact this has on immediate environments, the unceasing demand for sand and the lack of legal interference from the Indian government means that sand mafias will only continue to steal and sell in vast quantities. This is likely to keep happening until the laws against them tighten severely, or new methods of sourcing the essential construction ingredient are found.

Recycling demolition waste as a substitute

Man made infrastructure is not only consuming sand at an astonishing rate, but it is also preventing sand supplies from replenishing themselves. Less than 50% of sand and gravel reserves have been replenished in the last five years.

One way to reduce the amount of sand being plundered from the depths of the earth, is to reuse and recycle the construction materials we already have. Each year, millions of tonnes of waste are produced during demolition and construction projects across the world.

Efforts to put this material back into production are gradually increasing. Many construction and industrial removal services in the UK are part of Waste and Resource Action Programme (WRAP). For companies such as OCS Environmental Services, who specialise in eco-friendly commercial waste removal, the ambition is to salvage and recycle as many demolition-derived materials as possible to make them available for reuse in further construction.

In countries such as India, this environmentally sound approach has only recently been introduced. Indian construction waste currently goes straight into landfill sites – a behaviour that perhaps goes some way to explaining why the sand trade problem here has become so extreme.

An example of a hugely successful recycled building project was the 2012 Olympic Park in the UK. 25% of the aggregate resources came from recycled materials and 99% of all demolition was recycled.

The implications of replicating this model of construction all over the world would be monumental. Premier Platform Lifts, who depend on sand to construct their glass lifts, recognise that ‘green’ construction is now a major industry and that more architects are striving to create workplaces that have a minimal environmental impact.

If recycled demolition waste can become a recognised replacement for sand, not only would this save natural resources, it would also reduce the price of sand, transportation, trade and therefore dramatically impede sand mafia activity.