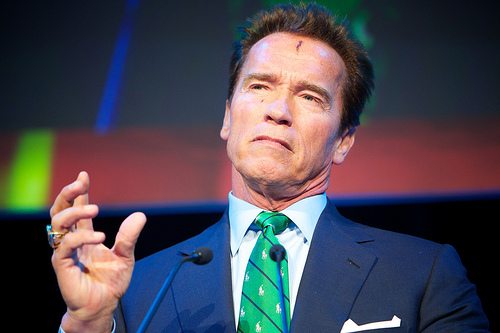 Arnold Schwarzenegger and Michael Bloomberg are among 14 influential centre-right figures to have contributed to a new report that aims to “reinvigorate” the conservative environmental agenda.

Responsibility & Resilience: What the Environment means to Conservatives is a project led by the London-based Conservative Environment Network. It argues that environmental conservation is fundamental to conservative politics and that the prosperity and security of the economy and society is dependent on a healthy planet.

Schwarzenegger, the governor of California until 2011, writes that the environment is as important in political terms as jobs, security and healthcare. Meanwhile, Bloomberg uses his decade of experience as New York City mayor to argue that going green is “good for growth” in urban settings.

Ben Goldsmith, co-founder of leading sustainable investment firm WHEB and chairman of the Conservative Environment Network, described Responsibility & Resilience as “the most wide-ranging and ambitious doctrine on the environment ever to come from business and the conservative movement”.

He added, “Partly it’s a reminder of the conservative tradition of Margaret Thatcher, Benjamin Disraeli and Edmund Burke, all of whom framed their politics in the context of responsibility to future generations.

“But the bigger message is that only the conservative tools of competition and the free market are powerful enough to deliver the environmental security and economic resilience we need for a stable society. For me, that means the right must lead on the environment.”

Among the other contributors to the pamphlet are the education secretary Michael Gove, the environment secretary Owen Paterson and former chairman of the World Bank James Wolfensohn.

Chief executives from businesses with over £100 billion in market capitalisation between them – including Paul Polman from Unilever, Sir Stuart Rose from Marks & Spencer and Sir Ian Cheshire from Kingfisher – discuss whether shareholder value and consumer confidence are linked to environmental impact.

Speaking to Blue & Green Tomorrow in September, the former Conservative MP Peter Ainsworth – who was chair of the Conservative Environment Network before Goldsmith – said environmental conservation was “utterly and deeply embedded” in what being a conservative meant.

“I’m going right back to Edmund Burke here, who was one of the founding fathers of conservative thought… It strikes me that this is incredibly Conservative territory.”

In the new report, the 14 global figures conclude that the traditional conservative principles of competition and innovation were crucial in tackling the most pressing environmental challenges.

Goldsmith added, “The effect is to completely explode the myths that the environment belongs on the left of politics or that business is not leading on this issue. Centre-right parties around the world must now make the running with smart, growth-orientated environmental policies.”

Responsibility & Resilience is being officially launched at a parliamentary event on Wednesday afternoon.

Thatcherism was never about ‘me’ and ‘now’. Quite