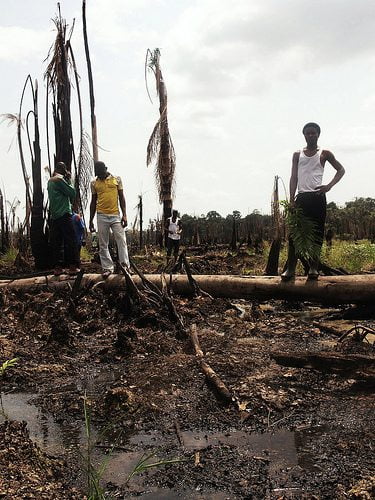 The London High Court has ruled that Shell Nigeria could be legally responsible for those bunkering its pipelines, if the firm does not take proper steps to protect them. This means that the oil giant could be forced to compensate the Bodo community for damage caused by oil spills.

In the first legal proceedings in the UK, Shell is facing claims from Nigerian communities for two oil spills that occurred in 2008 and 2009, which have devastated the environment and affected the lives of the locals.

Shell has repeatedly argued that the spills in the Niger Delta are usually caused by criminals who damage the pipelines and steal oil, and not by ageing infrastructure or technical failures. It blamed the Nigerian state government for lack of security.

However, the first judgment of the trial has ruled that if the company fails to take adequate measures to protect the pipelines, for instance by installing surveillance cameras, it could be considered liable.

Speaking after the hearing, Martyn Day, senior partner at Leigh Day, which is representing 15,000 individuals from the Bodo community, said, “This is a highly significant judgment. For years, Shell has argued that they are only legally liable for oil spills which are caused by operational failure of their pipelines and that they have no liability for the devastation caused by bunkered oil.

“This judgment entirely undermines that defence and states in clear terms that Shell does have potential liability if it fails to take reasonable steps to protect its pipelines.

“This will have broad implications since Shell is now potentially liable for the mass pollution of the Delta in which it has pumped and spilt oil over at least the last 20 years, not just for operational oil spills.”

However, Mutiu Sunmonu, managing director of the Shell Petroleum Development Company of Nigeria Ltd, said the ruling was a victory for the company and asked rivals to stop claiming exaggerated compensation.

“From the outset, we’ve accepted responsibility for the two deeply regrettable operational spills in Bodo”, he said.

“We want to compensate fairly and quickly those who have been genuinely affected and to clean up all areas where oil has been spilled from our facilities, including the many parts of Bodo which have been severely impacted by oil theft, illegal refining and sabotage activities.”

Shell offered compensation for £30mlast year, which communities said was inadequate and “insulting”.