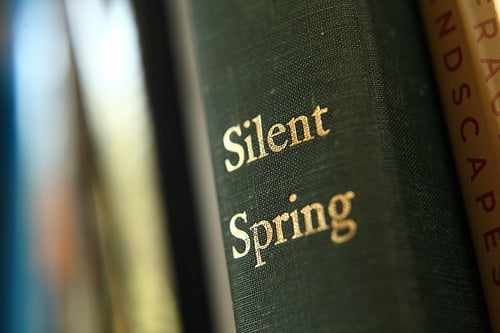 Today marks half a century since the publication of one of the environmental movement’s seminal books – Rachel Carson’s Silent Spring.

Published on this day in 1962, Carson’s eloquently simple thesis was that the increasing use of pesticides was harming animals, insects and birdlife, which in turn had consequences for humans.

“But man is a part of nature, and his war against nature is inevitably a war against himself”, she wrote.

The book’s title was a nod towards the impact that pesticides would eventually have on wildlife, in that a silent spring would be one without any birdsong or animal calls. John Keats’ 1819 poem, La Belle Dame sans Merci (French for The Beautiful Lady Without Mercy), was a big inspiration behind its naming. In particular the line, “The sedge is wither’d from the lake, And no birds sing”.

Silent Spring influence wasn’t just as a work of environmental literature. It’s credited with playing a pivotal role in the banning of the pesticide DDT in the US, 10 years after its publication in 1972. And today, its impact still reverberates heavily within environmental circles.

But half a century on, other pesticides continue to threaten numerous species. According to campaign group Friends of the Earth, it’s bees that are under the biggest threat, because of a “new generation” of neonicotinoid pesticides – which are toxic to bees.

Friends of the Earth’s research appears to highlight a stark increase in the deaths of queen bees that come into contact with the chemical, and nature campaigner at the organisation, Sandra Bell, called for strong government action to end the use of neonicotinoids.

“Fifty years on from Silent Spring, we still have a government that is failing to act to stop the harmful impacts of pesticides on our natural world”, she said.

“The UK dragged its feet over banning the highly toxic pesticide DDT, despite strong evidence it was killing birds and now we’re way behind other countries in taking action to protect bees.

“The government must stop prolonging this issue and suspend the use of neonicotinoid pesticides and set out a clear strategy to help farmers cut their dependence on chemicals.”

Rachel Carson died two years after Silent Spring was published, and although her book played a crucial role in lessening the global use of DDT, the 21st century has brought with it a new, improved and more dangerous selection of pesticides.

It is left to Carson, whose five decade-old book looks as relevant now as ever did, to conclude, saying “It is ironic to think that man might determine his own future by something so seemingly trivial as the choice of an insect spray.”

To bee or not to bee?