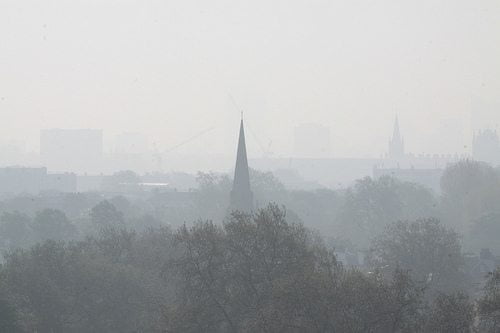 Exposure to air pollution can increase the risk of irregular heartbeat and blood clots in the lung, according to research that collected data in England and Wales on cardiovascular diseases.

A team from the London School of Hygiene & Tropical Medicine has concluded that small-diameter particulate matter can increase the risk of death from arrhythmias, atrial fibrillation, and blood clot in the lungs, drawing on data collected from 2003 and 2009 in 230 hospitals in England and Wales.

The study, published in the journal Heart, compared data on hospital admission and mortality rate with information on air pollution exposure collected from monitoring stations nearby patients’ locations.

“Elderly people and hospital patients with chronic ischaemic heart disease or irregular heart beat are observed to be at particular risk.”

Isobel Braithwaite, national coordinator of med student environmental health group Healthy Planet UK, told Blue & Green Tomorrow, “Analysing a large amount of data, this study found significant increases in risk of death from cardiac problems and blood clots in the lungs on more polluted days, as well as hospital admissions for many other conditions when nitrogen dioxide levels were raised.

“Together with growing evidence about the health effects of air pollution, there is a strong case for stronger government action to clean up our air, which would both benefit health and help tackle climate change.”

The UK faced a period of heavy air pollution in April, with many people suffering from respiratory problems. Figures by Public Health England (PHE), later revealed that air pollution represented “the biggest public health risk after smoking”, contributing to the death of about 29,000 people in the UK every year.