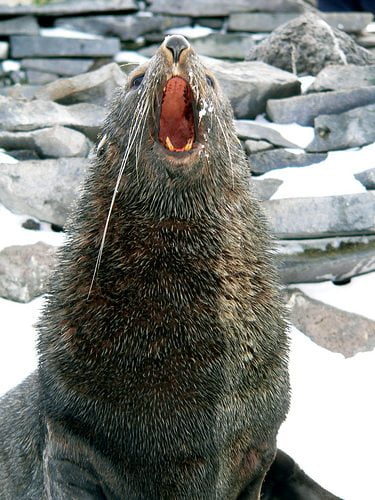 In a study published in the journal Nature, scientists have suggested that changes in the availability of krill – small crustaceans depending on sea ice – have caused Antarctic fur seals from South Georgia to become food-stressed.

This has meant pups being born with 8% less body mass and females breeding later in life, according to researchers.

Lead author of the study Dr Jaume Forcada from the British Antarctic Survey said, “Such changes are typically associated with food stress.

“Even if krill is very abundant, environmental variation determines its availability in the seals’ feeding grounds.

“This environmental variation is driven by the climate which impacts local atmospheric, sea ice and oceanographic conditions. Adverse climatic conditions are typically associated with low krill availability, and reduce the survival and breeding success of fur seals.”

Scientists have also analysed DNA of the seals and found mothers have a wider heterozygosity – genetic diversity – compared to 20 years ago. However, this characteristic is not passed onto pups.

Co-author, Dr Joe Hoffman from Bielefeld University explained, “We found that, over the last two decades, the proportion of breeding females that are highly heterozygous has increased, as these individuals are more likely to survive the changing conditions.

“However, in this case the seals do not appear to be evolving because surviving females do not pass their high heterozygosity on to their offspring. Therefore, with each new generation, the process of selection has to start all over again, with only those individuals that happen to be born more heterozygous having a good chance of survival.

“As the climate continues to change, many fur seal pups are not surviving to adulthood and the population is declining.”