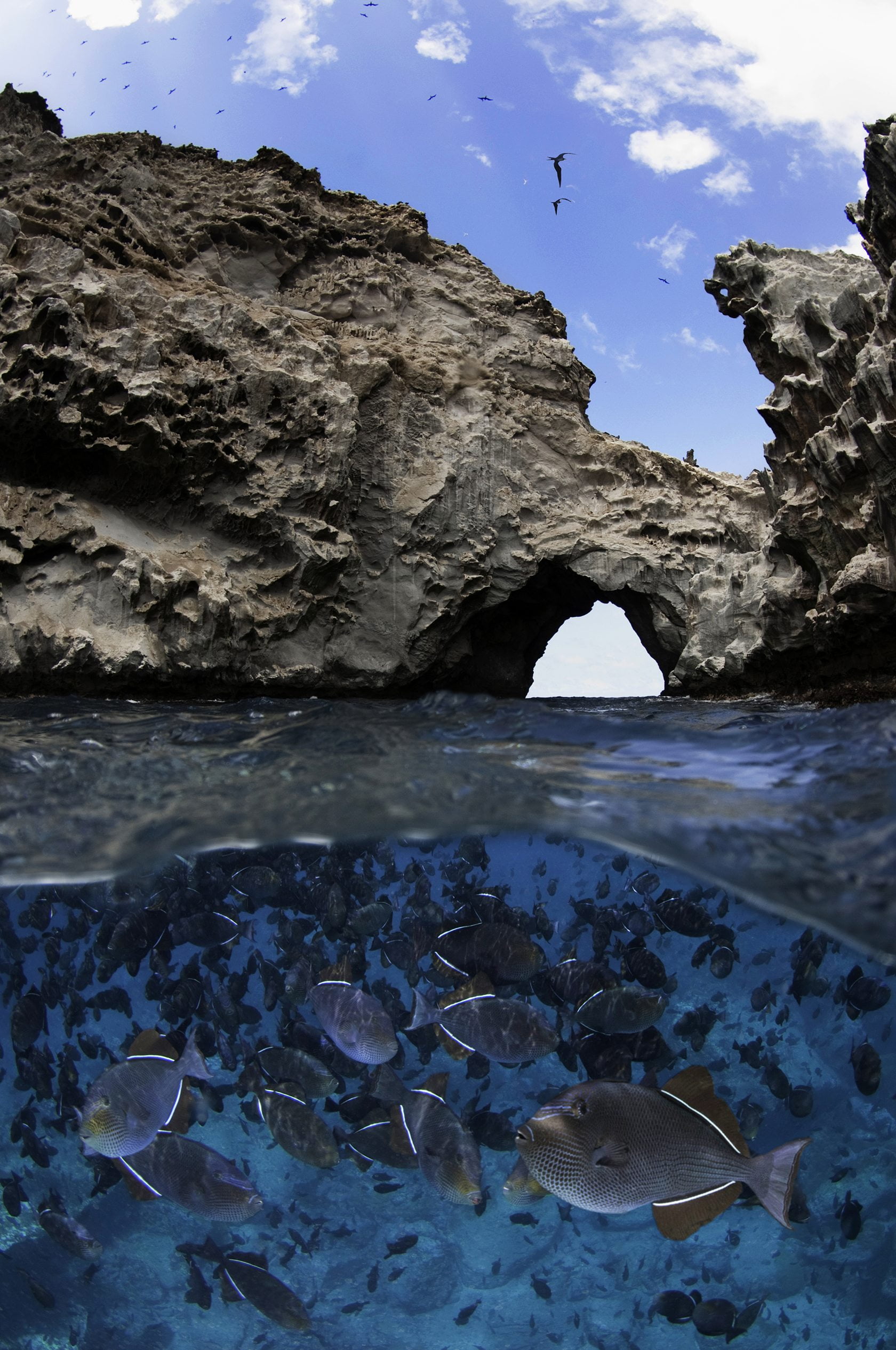 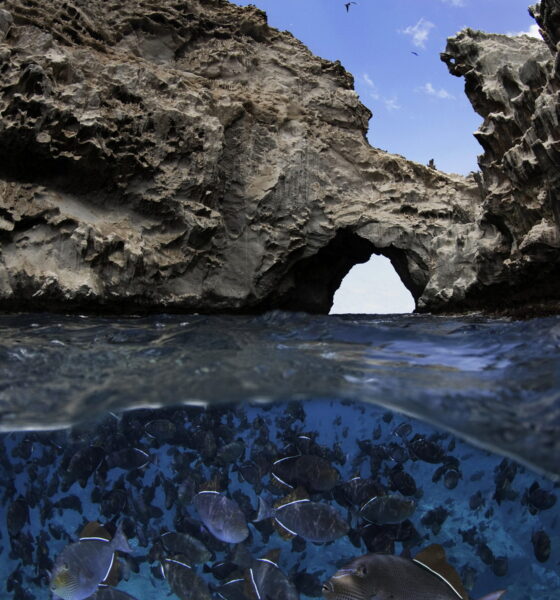 Britain once ruled the waves and used its naval might to end the transatlantic slave trade. One of the positive legacies of that imperial past, is that Britain can take a lead in changing the world for the better – creating the world’s largest marine protected areas around our Overseas Territories – the Blue Belt.

The last UK government committed itself to creating a Marine Protected Area around the Pitcairn UK’s Overseas Territory. What was described at the time by MP Zac Goldsmith as the: “Biggest conservation commitment by any government ever”, was slipped through on page 93 of the budget statement in March this year. Many will have missed it, as reception MC Nick Hurd pointed out. There was extraordinary little fanfare for such a extraordinarily huge conservation move.  Pledging to protect an area of ocean three-and-a-half times the size of Britain.

What followed in the Conservative election manifesto a month later, was an even bolder pledge to not only protect Pitcairn, but also Ascension and to create a ‘Blue Belt’ around other Oversea Territories.  A unique legacy of our imperial past is we indirectly govern the world’s fifth largest marine area, around Pitcairn, Ascension, South Georgia and South Sandwich islands. The government plans to protect that area’s marine biodiversity in partnership and with the consent those islands’ people.

The loud and clear messages from the evening were that 1) fishing can be sustainable – balancing fishing and economic needs with environmental protection, 2) rogue fishing can and will be tracked and policed, and 3) the UK government fully intends to lead the world in the creation of “a series of vast marine protected areas beside sustainable fisheries in many cases.” (Letwin).

Industrial fishing ships can stay at sea for months refuelling and offloading stock mid-ocean. A quarter of all fishing is illegal. We have depleted half the ocean’s biodiversity in just over four decades. But the world’s oceans are a notoriously difficult place to monitor and protect. Protected areas can be declared but monitoring and enforcement proves near impossible or prohibitively expensive to implement.

Or so we thought, until the Satellite Applications Catapult gave an impressive presentation at the event. They have merged satellite and radar data to create a real-time resource plotting the world’s shipping fleet and identifying those engaged in fishing. Analysts can track declared fishing vessels and monitor the behaviour of undeclared ones. Container ships and cruise liners tend to go in straight lines. Fishing vessels tend to hover where there are fish. If a ship exhibits suspicious behaviour the relevant authority can be notified.

Oliver Letwin gave a brilliant and unscripted speech emphatically underlining the government’s intention to make their Blue Belt commitment “real, not just for show”. He described a project that harmed neither people nor the economy, and benefited the planet so significantly, as a ‘no-brainer’. The government has started with Pitcairn and are well advanced with Ascension – with each territory having its own set of unique challenges. In one parliament the government will have done more to protect the world’s biodiversity than many have done in several parliaments.

And here Letwin made a critical point. Biodiversity is arguably an easier and less divisive concept to explain than the complex science of greenhouse gases and climate change. Ask someone to imagine a world with no other species in it – “a grey, concrete, species-less world” – and it’s not a place they would want to live. He encouraged us all to do our bit to tell the story better and the role of the oceans, to create a movement of real global significance.

The Blue Belts commitment is the right thing to do

And then Charles Clover, journalist and wordsmith, founder of the Blue Marine Foundation and creator of the unrivalled and terrifying The End of the Line documentary, gave a quietly impassioned speech which we unapologetically publish in full here.

“I’d just like to say a few words of thanks to Oliver, on behalf of the Great British Oceans coalition, for ensuring this Conservative manifesto commitment became a reality.  I’d like to thank Zac (Goldsmith MP), Nick (Hurd MP), Richard (Benyon MP) and the Conservative Environment Network, particularly Ben (Goldsmith chair of CEN and founder of Menhedin Capital), for their part in that too.  The Blue Belts commitment is the right thing to do.  I believe David Cameron said.  The two potential large marine reserves mentioned in that commitment, Pitcairn and Ascension, plus South Georgia and the South Sandwich islands, would compare with the creation of the first American national parks in the 19th century or African ones like the Kruger and the Serengeti in the 20th.  But these 21st century marine ones will be even larger.  They will be achievements on a global scale – and we thank you for them.

“As we’ve heard in the news today, the world’s oceans are in crisis.  So we see it quite simply as the responsibility of any country with a marine estate to take the recommended measures to protect species and habitats for future generations – particularly a country with 30 times its land area as sea, as Britain has, and 94 per cent of its biodiversity in its overseas territories.  We are delighted that the government has committed to doing so and we are proud to support it and the populations of the Overseas Territories in whatever ways we can, with lobbying, expertise and even whatever limited money we in the conservation movement can raise.

“This is an example of working together – between MPs, NGOs, the Foreign Office and the government as a whole, look who is in this room – which compares very favourably with action on climate change.  We, in the GB Oceans coalition are already working with the population of Ascension to find funds to support marine protection and helping the Pitcairn islanders and the Foreign Office with enforcement.

“I think it is important to remember that the manifesto says – as Oliver pointed out – that the point of Blue Belts is to protect precious marine habitats.  The manifesto says so several times.  It is not just a fisheries management or marine spatial planning exercise.  But I think it is also important to stress that we are not looking for a one-size-fits all solution.

“The 14 Overseas Territories are all very different.  They go from almost unpopulated to very populous, and from those who have no domestic need of commercial fishing to those for whom fishing forms the major source of income.  Let us be quite clear about our expectations.  We would like to work with OT governments to see large fully protected marine reserves in maybe five overseas territories.  But, and I would like to spell this out very clearly, that absolutely does not mean we campaigners want to stop all fishing in an Overseas Territory’s Exclusive Economic Zone.

“We do not believe in a simple choice between either sustainable fishing OR very large no-take zones.

“We believe a Blue Belt does mean reserves and marine protected areas but this can be compatible with sustainable fishing within the same EEZ.  These are the kinds of win-wins – for people and the marine environment – that we are after and are already working on.

“In Ascension the population actually wants to protect its rich marine resources which are being poached illegally without any enforcement at present.  As they are only 800 people with a marine estate larger than Germany, they simply cannot afford to do this at their own expense.  So we have to help Ascension create a new economic model based on marine protection, probably involving sustainable fishing in part of its EEZ and the Atlantic’s largest marine reserve, for turtles, sharks, whales and dolphins, in the rest.  At the moment the fishery is closed.  There is no policing of any incursions of the Far Eastern long line fleet which may be assumed to be plundering the place and which is suspected of having slave crews.  History is repeating itself here for Ascension was the place where the Royal Navy used to intercept slave ships sailing to Brazil which only abolished slavery in 1888.  We should be insisting that people wherever they are in our Overseas Territories in the words of Rule Britannia, those in our Overseas Territories, never, never, never shall be slaves.

“So I wanted to explain how we are already trying to help the OTs populations to secure their own ambitions for marine protection – and we’d like to do more.

“But I would also like to point out that the government needs to look again at a few things which seem no longer compatible with the manifesto commitment.

“First, the money.  There are very few sources of science or environmental funding for the overseas territories, other than the excellent Darwin fund, which isn’t enough.  It would be helpful if DFID funding could support the Blue Belt manifesto commitment as part of the review of aid spending.

“Second, Britain need to support efforts to create reserves and MPAs on the High Seas – at the moment Britain’s muted support for those things seems to be at odds with the manifesto commitment.

“Lastly we need to shift various obstacles currently in the way of helping to provide OTs with the benefits of marine protection by developing tourism and discovery science.   I gather it is called science tourism because scientists often drink a lot, need to stay somewhere and may do it for some time.  It can be worth a lot of money to an island.

“On Ascension an obstacle the locals find annoying is the failure of the US and UK to open up the Wideawake Airport – named after a loud colony of sooty terns nearby – to civilian flights.   That is essential to Ascension’s economy, but it is rather convenient to the military of both countries to keep people out.  The Wideawake Agreement, as it is called, ran out a couple of years ago.

“Given the commitment of both President Obama, John Kerry, David Cameron and Oliver Letwin to marine reserves, that will no longer do.  It is time to wake up and sign the Wideawake Agreement.”

Human civilisation depends on our oceans’ biodiversity. It’s where our species came from. The oceans feed over a billion people and provide a livelihood for 200 million. The overwhelming majority of what we own and consume will have travelled across an ocean at some point. The invisible shipping and fishing industries are vital to our physical, economic and social wellbeing. It’s a pity that we exploit this vital and fragile environment far beyond its capacity to replenish itself while simultaneously using it as the world’s largest waste dump and sewer.

We can be rightly proud of the UK’s government’s determination and leadership in Marine Protected Areas.