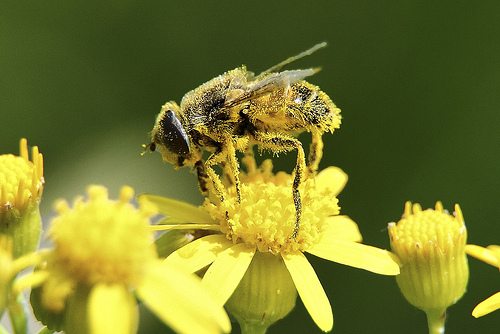 New research has found almost a third of France’s 900 species of wild bees live in towns and cities, suggesting that urban settings can play a crucial role in helping pollinators thrive.

The findings, published in the journal PLOS ONE, suggest that a good number of species can find enough food sources and nesting sites to survive and thrive.

Co-author of the study Laura Fortel, a researcher from the French National Institute for Agricultural Research (INRA) said, “For a bee species to be present in [an urban] habitat, it must be able to find food and nesting substrate.

“Urban and periurban (the transition between rural and urban) sites can provide high quantities of flowers all year long; they show a high diversity of land cover types and are often warmer than surrounding landscapes.

“Also, such habitats are seldom treated with pesticides, which are involved in the decline of bees elsewhere.”

The study concludes, “Urbanised sites can provide forage and nesting resources for a large community of wild bee species, even if the landscapes with an intermediate proportion of impervious surface have a more diverse and abundant bee fauna.”

Researchers concluded that the findings could help conservationists in raising awareness among urban citizens about biodiversity and the need to protect bees, which have experienced worrying decline in Europe and the US, mostly because of the widespread use of neonicotinoid pesticides, now banned in the EU for two years.