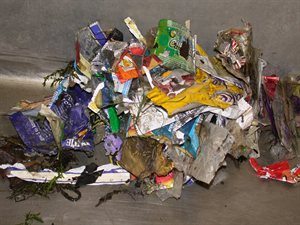 Scientists have discovered thousands of pieces of plastic submerged on the riverbed of the upper Thames Estuary, threatening wildlife in the river and the sea it feeds into.

Researchers from Royal Holloway, University of London and the Natural History Museum found that the sheer amount of plastic recovered during the study shows that there is an unseen stream of rubbish flowing through London. The plastic in the river could be a “serious threat” to aquatic wildlife and has the potential devastate ecosystems.

Dr Dave Morritt, a senior lecturer in marine biology at Royal Holloway and co-author of the study, said, “The potential impacts this could have for wildlife are far reaching: not only are the species that live in and around the river affected, but also those in seas that rivers feed into.”

The researchers used nets designed to catch Chinese mitten crabs over a three-month period. Using this method meant the scientists could trap and analyse litter moving along the river bed that is usually hidden from view.

However, the full extent of rubbish in the Thames remains unknown. The scientists said the research only provides a snapshot of the volume of litter, with plastic bags and other large items unlikely to be caught in the small nets used.

Dr Paul Clark, a researcher at the Natural History Museum and co-author of the report, commented, “This litter moves up and down the river bed depending on tides. The movement causes the pieces of plastic to break down into smaller fragments.

Separate research found that when toxic substances contained in microplastic enter the tissue of marine animals, it could alter an ecosystem’s functions.

Toxic chemicals can be found in many products we use today. The Marine Conservation Society recently warned that exfoliating skin products add plastic to our seas every time they are used.

27 new marines conservations zones to be created around English coasts