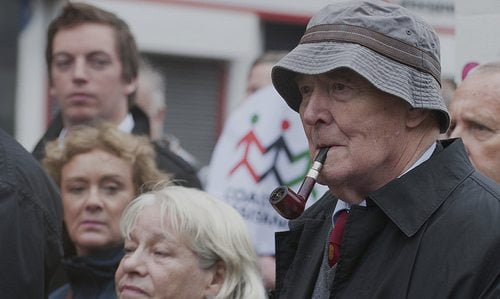 The tragic death of the great parliamentarian Tony Benn, and the untimely death of trade union leader Bob Crow at 52 on Tuesday, has robbed the left in the UK of two its most powerful and eloquent champions.

Benn was a Labour MP for over 50 years, and a prolific diarist and philosopher. He died on Friday, aged 88, after a long illness.

Below are some of his best quotes.

“Change from below, the formulation of demands from the populace to end unacceptable injustice, supported by direct action, has played a far larger part in shaping British democracy than most constitutional lawyers, political commentators, historians or statesmen have ever cared to admit. Direct action in a democratic society is fundamentally an educational exercise.”

“[Men] who would rather go to jail than betray what they believe to be their duty to their fellow workers and the principles which they hold.”

“What we lack in government is entrepreneurial ability.”

“The general election of 1983 has produced one important result that has passed virtually without comment in the media. It is that, for the first time since 1945, a political party with an openly socialist policy has received the support of over eight and a half million people.”

“Having served for nearly half a century in the House of Commons, I now want more time to devote to politics and more freedom to do so.”

“If one meets a powerful person – Adolf Hitler, Joe Stalin or Bill Gates – ask them five questions: ‘What power have you got? Where did you get it from? In whose interests do you exercise it? To whom are you accountable? And how can we get rid of you?’ If you cannot get rid of the people who govern you, you do not live in a democratic system.”

“[The Labour Party has] never been a socialist party, but it’s always had socialists in it, just as there are some Christians in the Church, it’s an exact parallel.”

“If we can find the money to kill people, we can find the money to help people… An educated, healthy and confident nation is harder to govern… I think there are two ways in which people are controlled. First of all frighten people and secondly, demoralize them… People in debt become hopeless and hopeless people don’t vote. They always say that that everyone should vote but I think that if the poor in Britain or the United States turned out and voted for people that represented their interests there would be a real democratic revolution… Choice depends on the freedom to choose and if you are shackled with debt you don’t have the freedom to choose… I think democracy is the most revolutionary thing in the world, because if you have power you use it to meet the needs of you and your community…”

Interview with Michael Moore in the film Sicko (2007)