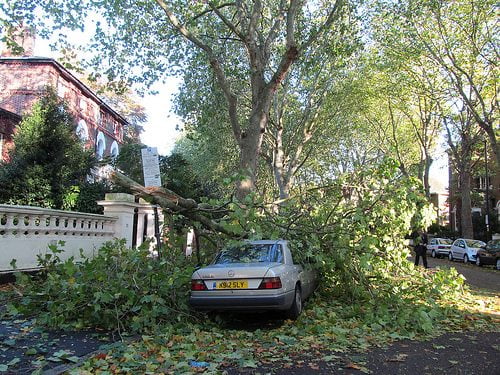 As the UK surveys the damage caused by the St Jude’s Day storm, a study has warned that the forecast for the next 50 years is more of the same.

A 17-year-old girl in Kent and a man in Watford were killed by falling trees after the storm hit southern Britain. A 14-year-old boy is also feared dead after being swept out to sea at Newhaven, East Sussex.

A man and a woman also died in a collapsed house in London, after a falling tree caused a suspected gas explosion.

Rail services and flights were cancelled, while around 270,000 homes lost power. Winds of up to 99mph were recorded.

The storm has also heavily damaged at least five houses, destroyed a wind turbine in Devon and collapsed a crane onto the roof of the Cabinet Office.

The Environment Agency has issued 11 flood warnings – in south-west England, East Anglia and the Midlands – and 121 flood alerts across England and Wales. It has told people to avoid seafronts, quaysides and jetties due to the risk of overtopping by waves and wind blown shingle.

The Met Office predicts that conditions will remain quite windy through the evening and night with some heavy showers but confirm that the storm has now passed the UK.

It has now intensified further however, and has reached southern Scandinavia with winds reaching over 100mph.

According to a study by the Norwegian Meteorological Institute and the European national science academies, such events may become more frequent in the coming decades.

“Studies suggest higher precipitation intensity for Northern Europe and increased dry-spell length for Southern Europe. High intensity and extreme precipitation are expected to become more frequent within the next 70 years”, the report warns.

“The increased frequency is estimated to be larger for more extreme events, but will vary considerably from region to region. The seasonality and structure of precipitation is expected to change.”

The report adds that Europe’s future weather conditions are very likely to be influenced by manmade changes to the climate caused by greenhouse-gas emissions.

A study published in September studied the causes of 12 extreme weather events from 2012, such as droughts, loss of Arctic ice, hurricanes, heavy rainfalls and heatwaves. It found that human activities and manmade climate change had played a role in causing half of these phenomena.