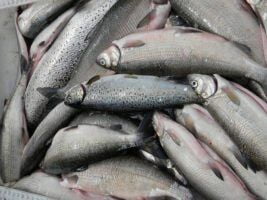 The status of fish stocks as revealed by the UN shows 89.5% are fully fished or overfished, while OECD forecasts 17% rise by 2025 in fish production.

The United Nations Food and Agriculture Organization (FAO) has today released its report on the state of world fisheries and aquaculture. The flagship SOFIA report, considered a check-up on the world’s fish supplies, has confirmed an alarming trend over the years in falling fish stocks, the result of vast overfishing on a global scale. Oceana regrets the new findings, which place overfished and fully-fished stocks at 89.5% in 2016, compared to around 62-68% in 2000.

We now have a fifth more of global fish stocks at worrying levels than we did in 2000.

“The global environmental impact of overfishing is incalculable and the knock-on impact for coastal economies is simply too great for this to be swept under the rug any more”, said Lasse Gustavsson, Executive Director of Oceana in Europe.

In a parallel report published earlier this week on agriculture and fisheries, the Organisation for Economic Co-operation and Development (OECD) forecasts a growth in fish production of up to 17% by 2025. However, due to declining fish stocks, only 1% will come from fisheries, with aquaculture becoming the driving force behind this growth.

Oceana believes that aquaculture is not the solution to meeting an increasing global demand – we must first address the unsustainable exploitation of wild fish. In fact, the OECD stressed that the rise in fish production hangs in the balance of environmental factors and productivity in fish stocks.

“The figures speak for themselves. Overfishing will knock wild, everyday fish from our dining tables replacing it with aquaculture and other seafood. Only through sustainable fisheries management and by ending overfishing will we really able to increase fish in our oceans and ensure seafood can be put on a plate for millions of people”, concluded Gustavsson.