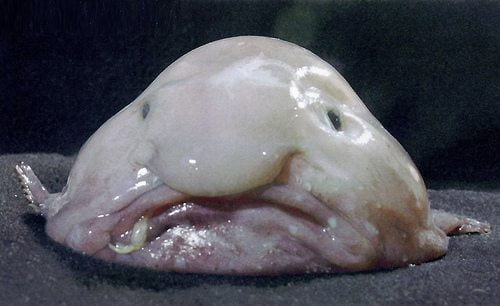 It makes an unlikely poster boy, but the blobfish, a rarely seen species of deep-sea fish, has been voted the ‘world’s ugliest animal’ and adopted as the mascot of the Ugly Animal Preservation Society.

The campaign was launched to raise awareness for “Mother Nature’s more aesthetically challenged children.” The society say that unattractive animals need more help because of their, “less than “pinup” appearance.”

Simon Watt, biologist and President for Life of the Ugly Animal Preservation Society, said, “We’ve needed an ugly face for endangered animals for a long time and I’ve been amazed by the public’s reaction. For too long the cute and fluffy animals have taken the limelight, but now the blobfish will be a voice for the mingers who always get forgotten.”

The blobfish saw off competition from repugnant challengers such as the proboscis monkey, the dung beetle and the Dromedary jumping slug. The 11 competitors each had an election video, with comedians championing each ugly species.

Paul Foot, a regular on BBC panel show Never Mind the Buzzcocks, supported the blobfish. “Some would describe it as a bit ugly, but I think the sad face of the blobfish belies a kind and very wise little brain in there,” he said.

The fish lives at depths between 600 and 1,200 metres, where the pressure is several dozen times stronger than at the surface. The flesh of the blobfish is made up of a gelatinous mass only slightly less dense than water; allowing it to float above the sea floor without expending energy on swimming.

Blobfish, though inedible, are often caught accidentally in deep-ocean trawling nets. Deep ocean trawling involves dragging heavy metal equipment along the seabed at a high speed, and has been called “the most destructive form of deep-sea fishing in the world.”

The heavy nets not only drag up vulnerable species such as the blobfish, but can gouge out corals and tear through ecosystems.

This month, the EU are scheduled to vote on whether to phase out bottom trawling in the Northeast Atlantic and introduce legislation requiring any future deep ocean fishing to require prior environmental impact assessments. The practice is already prohibited in many susceptible areas.

Scientists do not know exactly how many species we are losing worldwide. It is currently estimated that by some that at least 10,000 species go extinct every year, although this figure has been disputed.

This rapid loss of species is estimated by some scientists to be between 1,000 and 10,000 times higher than the ‘background’ extinction rate – the rate that would occur if humans were not around.