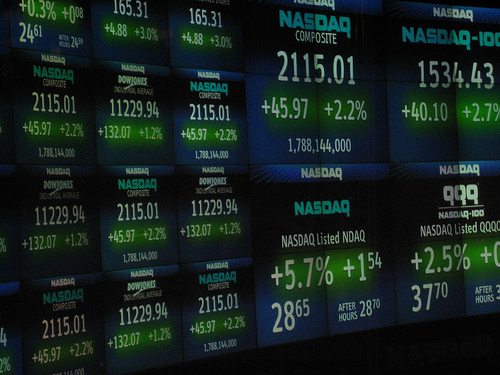 You don’t have to look 30 years and beyond to be rewarded for a responsible investment. There are some extremely powerful factors that suggest investing this way now makes financial sense.

There is a mountain of challenges that face us environmentally: the need for alternative energy, the need to save energy, waste management and conserving our water supply more efficiently. And there are many more: retaining healthy sustainable agriculture and forests, improving the physical and social environment in our towns and cities. The list goes on.

Past evidence, however, has shown that we tend to find ways of developing technology to help overcome environmental challenges, and those companies at the forefront of this technology will prove to be successful.

And what happens when a technology solves a problem and becomes successful? In basic terms it means that companies in this area will start making profits, enhance their share value and further down the line start paying dividends to their shareholders. If the paying of dividends becomes a long-term trend, then the share will appreciate even further.

This might sound a little obvious but this is what sensible long-term investing in the market is all about. This is perhaps easy to forget after all the recent crises that have surrounded the markets. The end of 2008, for example, has left a nasty taste in the mouth for people where they simply have seen the market as a casino for gamblers.

So let’s break this down in a bit more detail and see how companies are benefitting from specific environmental challenges.

Successful companies will be those that benefit from the ecological constraints

The developed world is facing a number of targets. As a result, there is a very real desire to find solutions and make them commercially viable. This need couldn’t be more relevant than when applied to alternative energy.

However, good news is at hand. We are starting to see real indications that companies who are developing in this area are showing real signs of future sustainable returns.

An example would be SSE Group plc, previously Scottish & Southern. SSE is one of the UK’s largest power generation providers that has made significant inroads into the renewable energy sector. In fact, it has ownership interest in over 100 thermal and renewable power stations and is now Scotland’s leading renewable producer.

This has helped to reap positive rewards for investors. In particular, its dividend payments have shown sustainable growth over the last 10 years. In 2003, the dividend per share was 30.5p. This has risen consistently over the last 10 years, outstripping inflation, up to 2013 where the announced dividend is 84.2p per share. Based on its share price on January 1 2013, the dividend payment equates to just under 6% of share price value.

An overseas example would be the Elster Group based in Germany. It is benefitting from the constraints that face us with regards water and energy efficiency. It does this by providing advanced metering solutions and smart grid technology. It is now recognised as one of the major players in a high-growth industry with operations in over 100 countries.

This can be seen from the analysis carried out by the Nasdaq market, the second largest American stock market, which Elster joined at the back end of 2010. In its summary of January 30 2012, Nasdaq showed that Elster’s earnings growth for 2011 was 33.24% against an industry average of 18.10%.

It also shows that the share price reflects good value given this level of earnings. Not surprisingly, its analysts currently indicate the stock as a very good buy. Both these stocks have been invested in by certain sustainable and responsible investment (SRI) collective funds.

I have had many conversations in the past with people about investing for the environment. One common response is, “What’s the point us doing anything about it when the new emerging countries will simply ignore their responsibilities.”

But this is missing a significant point. Countries like India and China don’t have the same traditional infrastructure and industries that we have. They are starting from a newer base. Therefore in many ways they are far better equipped to take on new technologies, and new technologies that will have economic as well as environmental rewards.

A fine example of this would be the potential of the solar industry in China. With the help of clear government planning, subsidies, and a lower cost base, China has stolen a march on its western rivals and has now become the largest world exporter of solar equipment.

This has resulted in very sudden growth for the top companies in this area. JA Solar is one such company. It is now one of the world leaders in solar cell production. Its growth has been astounding. Between 2009 and 2010, total revenues increased from $3.8 billion (£2.23 billion) to $11.8 billion (£6.92 billion), a percentage increase of 211%.

It could be argued that these levels of growth cannot be sustained, particularly as margins have recently been squeezed due to price pressures. As a result, companies like JA Solar may have to diversify from being driven purely by exports. The signs for development however are encouraging.

China, for example, is planning to develop its domestic market. It has set itself a target that it will generate 15% of its energy from solar power by 2020. This would make it by far the biggest solar producer in the world. This then provides huge opportunities for companies like JA Solar to expand into areas like solar project development.

There are now plenty examples of companies making healthy profits by finding solutions to social challenges. One such challenge is that of health and wellbeing. With an ever ageing population, there is now a greater demand for innovative, quality, medical care.

One such company very much at the forefront of this is Smith & Nephew. Founded in the UK in the early part of the last century, it is a world leader in the provision of precision equipment for the medical industry, in particular orthopaedic treatment, wound management, and invasive surgery.

More importantly, its continued success seems to be very much related to the social impact of its business. Its vision refers to it “helping people regain lives by repairing and healing the human body“. It also goes on to stress the importance of the quality relationships it has with medical professionals and other stakeholders.

This socially responsible approach certainly seems to have helped Smith & Nephew achieve strong financial results. Firstly, since 1937 it has never failed to pay a dividend. This and other factors have resulted in real strength with regard to its share price.

For example between February 6 2002 and February 6 2012 the share price increased by 60%. This compared with a 16% rise by the FTSE 100 (of which it’s a constituent) over the same period. Again, interestingly, this is a stock you can invest in through SRI funds.