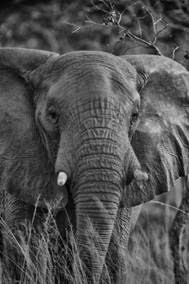 The Zambian Wildlife Authority (ZAWA) is conducting aerial surveys of elephants and other large herbivores in three of Zambia’s national parks.  The Nature Conservancy is facilitating the training of ZAWA ecologists on data collection and organizing the approximately 258 hours of flight time over the course of four weeks.

The results of this survey have implications far beyond Zambia’s borders, especially since this area lies in a region that is a stronghold for the African elephant.  Funded by philanthropist Paul G. Allen, this endeavour is part of a continent-wide effort called the Great Elephant Census. This count will be the first pan-African census in over 40 years. Researchers in 20 countries will use a standardized method of data collection to create an up-to-date picture of the status of African elephants. The insights revealed through this survey can help create tailored management plans to more effectively protect elephants and deploy the limited conservation resources and dedicated rangers where they will be able to make the most impact.

“Wildlife is one of Zambia’s most valuable renewable resources and it needs to protect it because without it there is no tourism.  Tourism is one of the industries that has a huge potential to contribute to Zambia’s economic growth; without these animals, there is no tourism,” said Ambassador Schultz.

By now, most people know that the African Elephant is in danger. Increasing demand for ivory from places like China, the Philippines and even the United States have sent elephant numbers plummeting recent decades.

“In 1981, Zambia alone had an estimated 160,000 elephants.  Today their number is likely one tenth of that.  It’s critical to deploy Zambia’s limited conservation resources and dedicated rangers where they will be able to make the most impact,” said David Banks, Africa Managing Director, The Nature Conservancy.