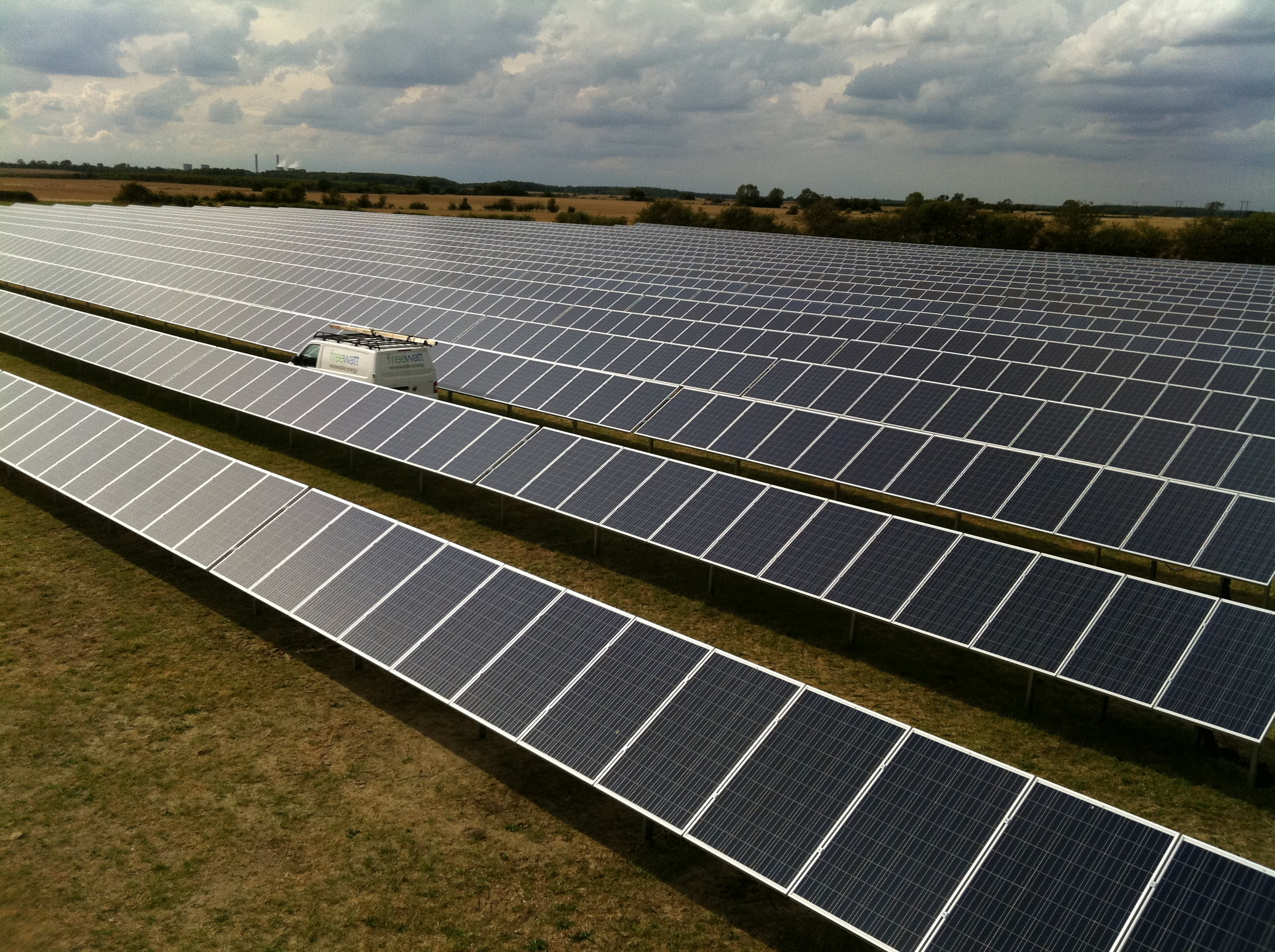 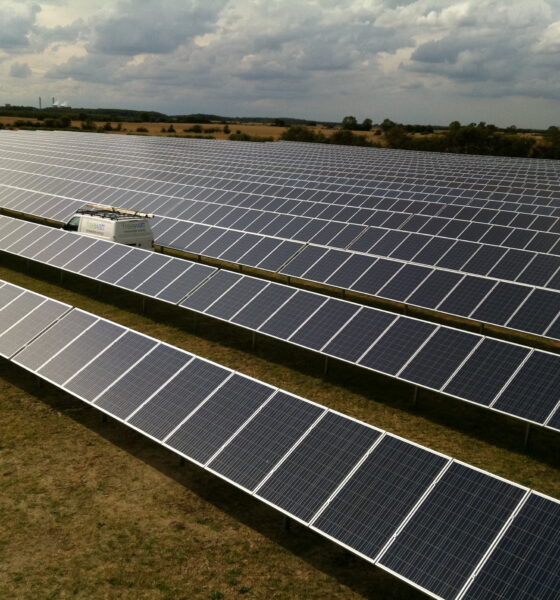 In the renewables industry, it’s often the case that campaigners enjoy much of the limelight. But without firms to invest in, install and build the technologies, the foundations of the burgeoning sector would be weak. So with that in mind, Alex Blackburne spoke with Julian Patrick, managing director of solar specialists Freewatt, about working on the frontline of an energy revolution.

The quaint Lincolnshire village of Stow, located 11 miles north of Lincoln, is probably not where you’d expect to find one of the country’s most prolific renewable energy developers. But, on a farm just 15 minutes’ walk from Stow Minster, an 11th century parish church, is Freewatt, Lincolnshire’s largest renewables firm that is almost single-handedly responsible for all of the county’s most significant solar installations.

Its office in Stow boasts an £8.5m solar farm – one of the largest in the UK – that will eventually produce 3.3 megawatts (MW) of electricity; enough to power nearly 1,000 homes. The 4,300 panels are expected to save 1.5 million tonnes of carbon dioxide a year; the amount of CO2 emitted by the Caribbean island of Guyana on an annual basis. And the man behind it all is Julian Patrick.

An electrical mechanical engineer by trade, Patrick began lecturing about solar and so founded Freewatt in 2008. The firm now turns over some £6m a year, and employs 24 people in Lincolnshire. But Patrick’s introduction to renewable energy came as a youngster.

“I remember my physics teacher at school saying that one day; fossil fuels will be so expensive that everybody will have either a wind turbine installed or solar panels on their roof”, he recalls.

“It made perfect sense; they’re not making any more fossil fuels, and that kind of stuck with me. So when I set up the company, there was the ethical drive. I’d always been very interested in not only the technological aspect of renewables, but I also thought it would be the right thing to do.”

Although Freewatt now prides itself as a solar specialist, the firm’s roots are much broader. Patrick had intended to deal predominantly in the wind industry when he set the organisation up, with arms in biomass, solar hot water, solar photovoltaic (PV) and heat pumps. Meanwhile, being located in Lincolnshire – the second largest county in England, where much of the land is used for agriculture – anaerobic digestion was also on his radar early on.

But when the Department of Energy and Climate Change (DECC) announced in October 2008 that there would be a feed-in tariff scheme introduced in 2010 for domestic solar installations, it became abundantly clear to Patrick that solar PV was the direction that Freewatt should take. And it’s safe to say that he’s never looked back since, either.

“We’ve had a very buoyant past few years and we’re at a point now where within the solar PV market, we’re very much specialising on the large commercial projects”, explains Patrick.

“I made a strategic decision to concentrate on solar when it became obvious that we were going to have various problems with the planners if we continued working in wind. The lead times for getting a wind turbine in just made it a much more difficult business proposition really; so we ended up specialising in PV. I had experience in electrical PV as well, so it was quite rare that we were able to come into the arena with a good depth of knowledge from the off.”

I remember my physics teacher at school saying that one day; fossil fuels will be so expensive that everybody will have either a wind turbine installed or solar panels on their roof

Patrick’s decision to focus almost entirely on solar PV appears to have paid off, too – and not just in a financial sense. Although Lincolnshire possesses an almost ideal geography and terrain for both onshore and offshore wind development, developers have been met with significant opposition from anti-wind campaign groups when looking to erect turbines in the county.

And while hostility towards wind is certainly, and sadly, not exclusive to Lincolnshire, the leader of its county council being a vocal critic of the technology sets it ahead of most others when it comes to opposing developments. This is on top of the fact that two outspoken politicians who are notably sceptical about wind – Edward Leigh and energy minister John Hayes – are both MPs in Lincolnshire.

But Patrick explains how the key to widespread acceptance of large renewable developments is to clearly highlight the benefit that the surrounding community will get – whether it’s through supplying clean, locally-produced energy to their homes, or buying into the projects by purchasing shares and getting a financial return on the back of it.

“I think it’s a real shame that the council decided to take that stance”, he says.

“I can understand why; Lincolnshire is particularly flat. The biggest objection is that there is large-scale investment and venture capital groups coming in and putting in large wind farms in the county. There’s no real benefit to the county or anyone who is living in the county; it’s really just an investment bank making money and it’s the people in the county that has to look at them.

“Certainly from our experience, from smaller-scale wind, or particularly solar, there is very little objection at all. The important thing is that all of the work is done sympathetically and appropriately to the surroundings.

“In actual fact, we tend to find people are quite embracing of new ideas and new technologies; really it all comes down to education and letting the general public understand what can be done.”

It doesn’t help too that Lincolnshire is home to a relatively high proportion of people aged 65 and over – an age group that has repeatedly led opposition of wind in opinion polls and surveys. Some 21% of the county’s population fits into this demographic, compared to the national average of 16%, and in research conducted recently by YouGov into the UK’s attitude to energy, the older generation was by far and away the most staunchly against future wind development.

We tend to find people are quite embracing of new ideas and new technologies; really it all comes down to education and letting the general public understand what can be done

But age isn’t always a hindrance when it comes to sustainability. Another rather interesting facet of Freewatt’s work involves restoring period homes – of which there are plenty in Lincolnshire, and indeed, across the rest of the country. In June this year, Patrick bought a 300-year-old house and began embarking on making the property truly energy efficient through clever use of insulation, draft-proofing, smart energy systems and solar panels. He estimates that once all the measures are put in place – at a cost of around £1m – the £12,000 a year spent on heating and powering the property would be reduced by 80%.

“The common understanding from our experiences is that a lot of people in older properties resign themselves with having to pay over the odds for heating and running the property, which normally is the case”, Patrick describes.

“In rural Lincolnshire as a whole, because of its nature, there is a large proportion of the population not on mains gas. So these very same rural, older properties are being heavily disadvantaged, because they’re having to heat through either liquefied petroleum gas or oil, so the costs are astronomical. In working on this Georgian house, we’ll be able to demonstrate that in actual fact, not only can an older house be low-carbon, but they can be financially sustainable.” 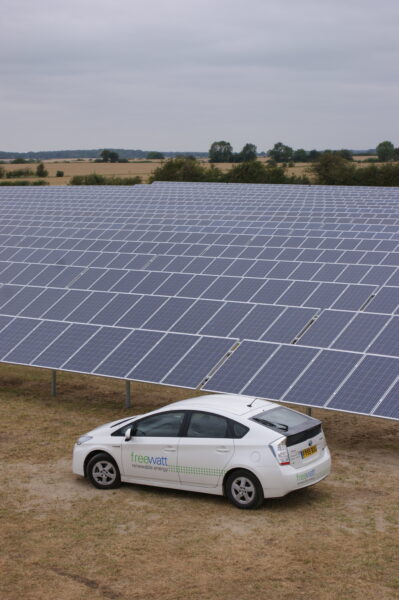 Patrick gave a talk at a recent renewable energy conference in Lincoln that Blue & Green Tomorrow also attended. In a question and answer session with John Hayes – the event’s keynote speaker – he asked whether the energy minister had any renewable technologies at his home.

“I’m not sure I have any on my own home, but I’d be delighted to consider putting some on”, replied Hayes, who went on to explain that he lived in a Georgian property in his constituency of South Holland and the Deepings.

He added, “It’s quite difficult because in terms of energy efficiency, we face the particular challenge of having the oldest housing stock in Europe, so we’re moving to a position where we can take perfectly sensible steps around new properties to the point that we’re dealing with a very large number of older ones.”

There’s no doubt that there is a huge market for sustainable renovation in the UK, because let’s face it; not everyone wants to live in an uber-modern eco-home, do they? A recent study by US consultancy firm McGraw-Hill Construction in partnership with engineering company United Technologies painted the UK as a world leader in green building. It revealed that 65% of British building companies were planning on undertaking some form of green renovation project within the next three years. The global average is 50%.

And Patrick adds that the work needed to make these older properties energy efficient and sustainable will take just 10 years to pay back – a small price to pay for living within your means in a beautiful period house.

With regards to solar – his first and most notable passion – he admits that the uncertain noises coming out of Whitehall with regards to feed-in tariff rates has meant that perhaps some domestic investors have been put off. But the fact remains that the rates of subsidy are still relatively lavish, and the advantages of investing in home-grown, clean energy far outweigh sticking with conventional supplies.

“One of the reservations that people have is that whenever you’re looking at investing or saving money, to some extent it has to be a leap of faith”, Patrick says.

“You have to know that it’s going to keep working and actually, you’re going to get your money back. The real attraction with solar PV is that it’s been around for long enough for us to show that not only is this system long-lived, stable and very low maintenance, but actually, we’ve got a lot of data to show how it actually performs in the real world.

“People can be confident to invest their money because they know what they’re going to get. The benefit of generating electricity of course is that they’ll be paid generously under the feed-in tariff, and also a large part of that benefit is about mitigating risk and reducing your exposure to the risk of rising energy costs.”

Rising energy costs have dominated the news of late, after DECC revealed its strategy in the recent energy bill. The plans lack a decarbonisation target, but for investors looking to dip their toe in the renewable energy sector, it goes some way to installing much-needed certainty and clarity.

Through Freewatt, Julian Patrick displays the kind of entrepreneurial innovation that is essential in the renewables revolution. And along with the many others doing similarly excellent jobs across the country, you can be assured that the industry is in very good hands.