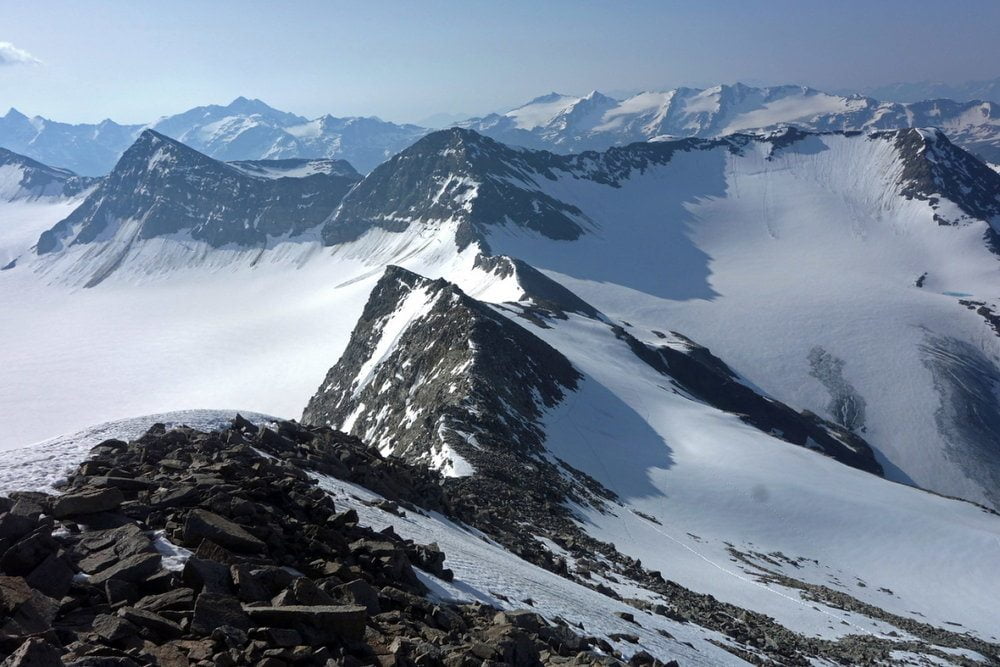 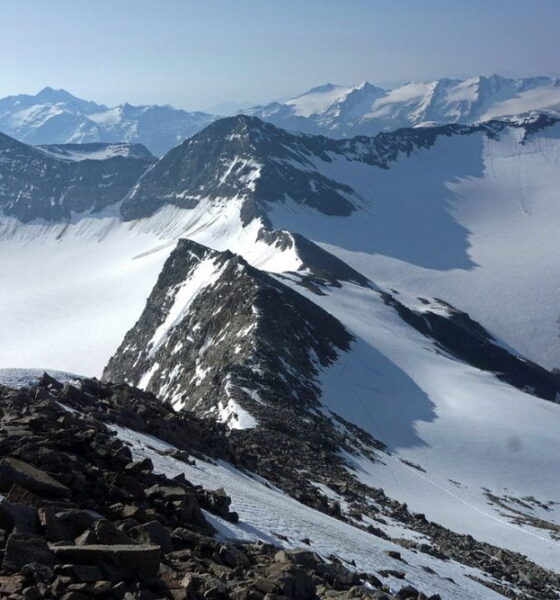 One of Blue & Green’s great friends undertook a rather remarkable and inspirational challenge over the summer. John Fleetwood, of 3D Investing, walked the length of the Alps. This article is republished by kind permission of Dan Bailey, www.UKHillwalking.com.

This summer ultra long distance fell runner John Fleetwood took on a huge challenge, a high-level traverse of the entire Alpine chain from Slovenia to Monaco. Between starting on 12th June and the finish on 14th August he spent most of the time alone, walking solo the full distance and with only infrequent valley support. Over his 1800km journey John reckons his height gain at around 125,000m, including ascents of a number of peaks along the way. In two months of hard slog he had only two rest days, despite occasional injuries.

Though the Alps end-to-end is by far his longest trip to date, John, who goes by the name Full moon addict on this site, is no stranger to extreme hill routes. See this article on a winter Broxap round for starters, and his website for many more. And his son Ben is no slouch on the hills either, for a while holding the record for the youngest Munro round.

UKH: Which were some of the more notable mountains you climbed en route, and what were they like solo?

John: The peaks I did included Triglav, Razor, Kellerspitzen, Tofane Mezzo, Keselkogel, Vertainspitze, Basadino, Dent Parrachee, Grande Motte, Monte Viso, Cime Argentera Sud. The 4000m peaks didn’t work out because I simply didn’t have time and my main objective was to get from Slovenia to Monaco and to trace the Italian border. Also traversing the 4000m peaks with my large pack would have been very testing. I was doing 12 hour+ days and couldn’t contemplate doing any more than this. Also to do the peaks I’d need to stop early to get the snow crisp in the mornings and also later on before it got soft which meant I just couldn’t fit them into the schedule. With another week I could have done them. In any event, I actually enjoyed the more obscure peaks far more. I climbed them without a guide book and in a few cases, a map. I dumped the pack, went with a bumbag and just sized up the route on the spot and explored. There’s a tremendous freedom in doing this. One time I wandered up to a little glacier and as the sack was too far to go back but it looked easy, I grabbed a sharp stone as my ‘axe’ and ascended the glacier and the ridge above. In t-shirt and running shorts I felt quite exposed, but also a real sense of exhiliration.

UKH: How did the weather and ground conditions treat you?

John: The weather was very poor for the first week – storms, violent hail, wet through several days; but then it was unbelievably good for most part. I hit a heat wave with temps > 30 degrees in the valleys for three weeks continuous, and up to 35 degrees at times. I was walking without a shirt most days and some days at 9 in evening at 2500m. I suffered heat exhaustion and dehydration. It was very dry with some lakes dried up. I was also exposed to three violent storms in bad places – tops of exposed passes with gap between thunder and lightning less than a second. I had to put fingers in my ears, the thunder was so loud. Hail was like a power shower being switched on full, and I wore my helmet against it. I was out in 11 thunderstorms altogether.

“I was so hungry. I lost a lot of weight mid trip due to just not being able to get enough food, then I put it back on by eating an enormous amount. When staying at huts I’d have multiple servings if I was able to and every time I went past a hut I’d have a piece cake or sandwich”

UKH: How did you manage to cope with that sustained level of effort: did you have any major problems along the way? And did you enjoy it throughout, or was it sometimes a bit of a slog?

John: I certainly didn’t enjoy all of it! I had florid diarrhoea for several days, had a cold at the start and was blowing blood for 23 days. I fell over innumerable times on account of very loose steep ground, and twisted a muscle above my knee. This gave me very severe pain for several days and the painkillers didn’t do a lot. I was reduced to propping myself up on my poles downhill with a sharp stabbling pain at every step. If that had continued it would have ruined the trip but fortunately after a number of people prayed for me, the pain went overnight and I never felt any ill effects thereafter. I was also unable to use my poles for some days, due to repetitive strain injury in my forearms.

I was reduced to tears on a number of occasions, crying out in exasperation at the boulders and vegetation. The paths were surprisingly awful at times, with dense, knee to waist high vegetation hiding rocks underneath. This was incredibly frustrating, especially downhill. Much of the Alps is pretty infrequently trodden and unfriendly with endless boulders, scree and overgrown paths. I can’t think how much of my time I spent on ground like this but it was a lot. I also suffered from the heat as I couldn’t get enough water on a number of occasions and spending 12 hours plus in the hot sun slogging up and down very steep, seemingly unending slopes was very tough. The horseflies were a complete pain at times, bothering me for hours on end as the sweat streamed off me.

I also met very few people until Monte Rosa. I was amazed at the lack of people and having exhausted my music collection and downloaded talks fairly early on, I had a lot of time to think. My Kindle broke so I had nothing to read after two weeks and only had a basic phone. Often I would have a hut to myself and apart from the first tunnel, met no-one on the 25 via ferrata I completed.

I bivvied out in a basic bag 11 nights, slept in 12 bivouac huts, 20 manned huts and split the rest between camping and hotels. One night I spent in the top part of a chairlift, sleeping under the wheel where the chairs go round. The bivvying was the best part of the trip. I was able to connect very intimately with my environment and to keep going until 9pm, getting up at 5am.

Quite a number of times I had a pizza and a beer, then did another two hours up a big hill. The beer made me a bit wobbly to start with, but it made for a very mellow climb in the evening. That time of day is my favourite as the heat of the day subsides and the light is spectacular. One time the weather didn’t play ball and a storm was followed by heavy all night rain which meant that I had to abandon ship (my bivvy) at 4am with everything soaking.

UKH: What did you take away from all this?

John: As a sabbatical it was fantastic and I didn’t think about work once. I felt that I really connected with nature and was part of the landscape for much of the journey. I was able to explore in a very free and instinctive way. I had time to reflect and clear my head and to experience the Alps as a whole. They are a decaying range, feeling the full force of climate change. The snowy parts that we think of are but a very small percentage of the total and are getting smaller still. The rock is generally awful, abounding in boulders and scree. The insects are abundant and the flowers carpets of natural beauty. I experienced all the highs and lows of a truly demanding but ultimately fulfilling trip. I knew I wouldn’t be able to prepare for it and I’m glad I could build in the spontaneity that I think made it special for me.

John has put together two short films (part 1 and part 2) that between them give a really good feel for the trip.

The trip was supported by Lowe Alpine and Keen.