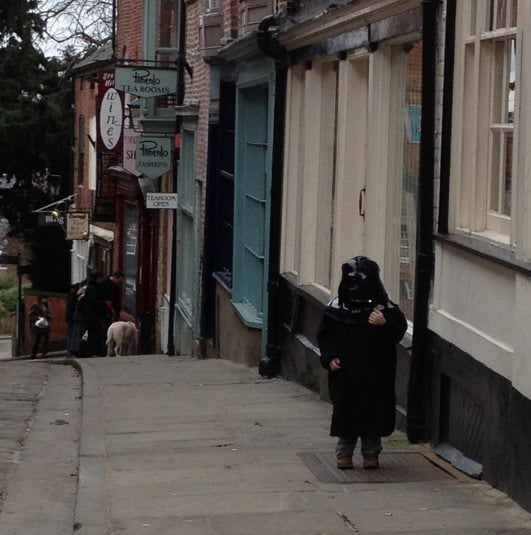 Apropos of nothing, but Star Wars!

To misquote Luke: “I had it (Episodes IV to VI), my half-brother had it (Episodes I to III), my sons have it (Episodes VII onwards).” While it has nothing to do with what we do, nor do we want to imagine the carbon footprint of Star Wars (imagine the environmental impact statement and supply chain of a Death Star), we’re finding it really very hard to work at full steam today due to the new Star Wars trailer being out (only watched it, like, five times). No shame in that, the geeks and nerds have taken over the planet and will ultimately be the ones who save it.

We did it for the new Danger Mouse (which my kids now love), so we have to do it for the new Star Wars. It’s like all the favourite things from my childhood are being reintroduced. Even The Clangers are on TV again!

And yes, that is Darth Small in the picture, aka William, bringing a little bit of the dark side of the force to Lincoln’s Steep Hill back in 2013.

To anyone who was five or older in 1977, enjoy (go full screen and crank that volume up)!