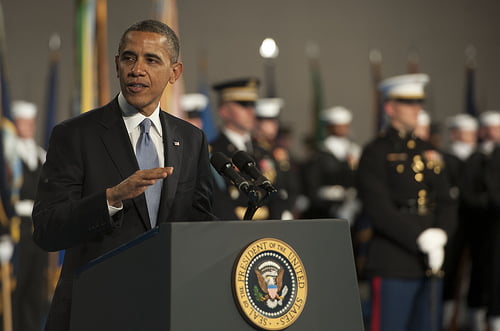 Barack Obama is reshuffling his pack ahead of his second term as US president. Charlie Wood assesses how the new-look cabinet will fare when faced with the energy and environmental challenges that lay ahead.

President Obama took many by surprise in giving a large and prominent portion of his second inauguration speech to combating climate change. He set aside a full paragraph to the issue, pledging to “respond to the threat of climate change, knowing that the failure to do so would betray our children and future generations.” The president also slammed climate deniers, citing “the overwhelming judgement of science” and the “devastating impact” of recent natural disasters across the country.

This was a markedly different speech to the one Obama gave in November last year, shortly after he was re-elected.

The President’s time in office has been quite good for the environment (pragmatically speaking) but his words at that time seemed to signal a shift in political direction, and a shift in the flow of political capital towards economic policy. The normally Obama-leaning Slate magazine seemed to have summed up the mood with a piece entitled Obama Makes It Clear He Isn’t Willing To Fight For Climate Change.

Cynics will say that one speech, no matter how important, does not a comprehensive clean energy policy make, but such criticism may be tempered by the make-up of the administration’s new cabinet, which is subject to senate approval.

As it stands, the cabinet is in a state of flux, and the president is far from getting things all his own way. Much of the cabinet will be unchanged from Obama’s first term: the office of vice-president and departments of justice, education and health all stay the same.

British-born US citizen Sally Jewell – an oil engineer and head of REI outdoor equipment stores – has been nominated to take over as interior secretary – a post that mainly involves managing the open spaces of the US. Although the nomination came somewhat out of the blue, Jewell’s multi-faceted experience of energy and the environment marks her out as a highly qualified candidate.

On nominating Jewell, Obama said, “She is an expert on energy and climate issues that are going to shape our future. She knows the link between conservation and good jobs.”  Her senate confirmation hearing is expected to pass without much incident.

The transportation and energy departments have been left somewhat rudderless following the announced resignations of their respective secretaries, Ray LaHood and Stephen Chu. LaHood worked tirelessly to enforce regulation within the automotive and aviation industries, ensuring tougher emissions standards that directly benefit the environment. He will be hard to replace, as will Chu, whose championing of renewables has helped take the US a long way down the very long road towards energy independence.

There is much speculation as to who will fill these important roles, but the current consensus seems to be that Deborah Hersman, chair of the National Transport Safety Board, is the favourite to take over transport, while science and energy advisor and MIT nuclear physicist Ernest Moniz is the likely pick for energy.

Hersman would seem to be the continuity candidate having been nominated for two two-year terms by the president in her current role. She is staying tight-lipped on the subject, but the fact that Obama has to fill an imaginary quota of more-women-than-he-has-now, allied with Hersman’s obvious experience and qualification, makes this appointment seem inevitable.

Moniz is not such a shoe-in, and his appointment would signal a controversial departure from Chu’s approach towards energy independence. Moniz is a champion of utilising the country’s vast natural gas resources in an attempt to eradicate coal-powered electricity production.

So far so clean, but the environmental risks associated with the controversial hydraulic ‘fracking’ method of extracting gas are as yet unknown. Moniz has described these risks as “challenging but manageable” in the past, and there is a certain inevitability about fracking in the US at this juncture.

If Moniz can balance this risk with environmental gains from reductions in coal pollution, as well as continue to focus on developing renewables with a medium- to long-term view, his potential appointment could be seen as a boon for the environment, however counter-intuitive that seems right now.

However, the big news for the green lobby regarding the formation of this cabinet is the appointment of John Kerry as secretary of state. Kerry has been a self-styled “passionate advocate” of environmentalism for over 20 years, and the news of his nomination was rapturously received by diplomats across the world, especially within the EU.

His nomination hearing went through the Senate without a hitch, thanks in most part to his many years of service in the upper house, but one has the sneaking suspicion that the way Kerry was treated during the 2004 election meant that few would dare come between the senator and his deserved big job.

He will keep climate change on the global agenda, and his mere presence at the next summit should lend gravitas to an occasion that often lacks big personalities. The Keystone XL pipeline will also fall under his remit, as it involves transportation of raw materials across the border with Canada, and if it is the natural disaster waiting to happen that many believe it to be it will not go ahead.

Fred Krupp, the president of the Environmental Defence Fund, remarked recently that Obama had “put climate change at the heart of his second-term”. This is deliriously wishful thinking; let us not forget that another highly significant speech, the state of the union address, is coming up this week.

Combating climate change has probably reached its peak in political and polemical usefulness for Obama for the moment, but the events of the past few weeks have proved that it is impossible to tell what this president is going to do or say next regarding the environment.