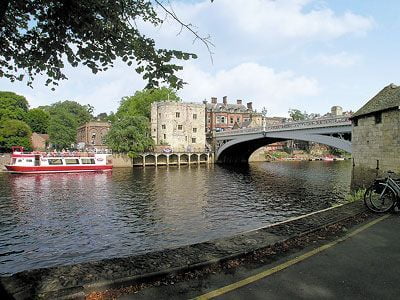 For readers that want to combine history with luxury, this week’s featured property in our cottages4you series – Lendal Tower in York – is an ideal fit.

Step into a piece of medieval history. With panoramic views over the beautiful city of York and the River Ouse, this spectacular 700-year-old Ancient Scheduled Monument offers a truly unique holiday experience.

In a landmark setting on the eastern banks of the River Ouse, the 14th-century, Grade I listed Lendal Tower originally formed part of the city’s defences and played a key role in the daily life of the medieval city – from here shipping tolls were collected and all river traffic was controlled.

Following the Civil War in the 17th century, the tower became the city’s first waterworks with a horse-powered pump supplying the water via pipes made from hollowed out tree trunks. In 1785, as proprietor of York Waterworks, John Smeaton FRS (the father of civil engineering and designer of the famous Eddystone Lighthouses) added a powerful steam-driven beam engine into the tower to cope with the city’s growing demand for water, later it became the proud headquarters of the York Waterworks Company.

Carefully renovated to retain its character, including ornate, original wood panelling and decorative ceiling plasterwork, the resulting accommodation is stunning. A spiral staircase leads from the ground floor living area to a mezzanine bedroom and on to the first and second floors, each with bedroom with dual-aspect river views.

Climbing a little higher, visitors reach the large roof terrace and are rewarded with a breathtaking view of one of the world’s greatest cathedrals, the magnificent minster, historic Lendal and King’s Bridges, the River Ouse, and the bustling 21st-century city that flourishes in the shadow of its ancient walls.

The Tower’s unrivalled central location is perfect for exploring a wealth of other historical buildings including The Treasurer’s House and The Merchant Adventurer’s Hall, visiting the National Railway Museum or the Jorvik Centre, and discovering the snickelways and alleyways that wind between York’s ancient cobbled streets.

On your doorstep are numerous attractions to suit all ages, with river boat trips, ghost walks, art galleries and theatres, plus an abundance of quirky shops, restaurants and inns.

Return to Lendal Tower and guests have the privilege of relaxing in the tranquil setting of their own private riverside garden. Shop and pub 30 yards.

For more information about this historic property, visit cottages4you’s website. Blue & Green Tomorrow receives a small agent’s commission from every holiday booked which helps fund our intern and researcher programme.