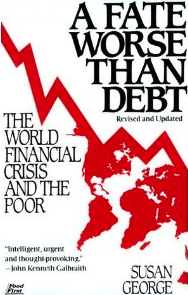 Political and social scientist Susan George considers the third world debt crisis and looks at how and why the global wealth gap is continuing to wider in her 1990 book, A Fate Worse Than Debt.

George argues that the world benefits a minority that will “stop at nothing to maintain and strengthen its control and privilege”. She looks at how a wide variety of organisations and institutes, from banks and creditor-country governments to the World Bank and the International Monetary Fund (IMF), have an impact on third well debt and wealth and first world countries.

The author takes the view that the IMF is allowing the current situation to continue. She argues that the issue should be moved off the financial pages onto the political agenda because the debt is causing poverty.

The issues and arguments raised in A Fate Worse Than Debt are clearly explained in layman terms allowing everyone, even those without much knowledge on the subject, to understand George’s point of view. A number of examples are presented to back up the points made.

The book will make readers sit up and consider what is happening in the world and how organisations are having a negative impact on the development of some countries. This book is a great read for anyone looking to understand the economic reasons for global inequality and third world debt.