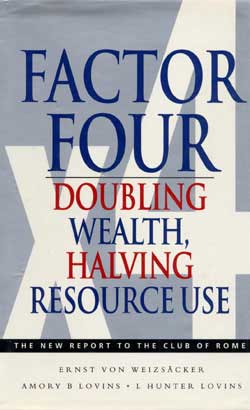 Factor Four: Doubling Wealth, Halving Resource Use is a report from the Club of Rome, written by Ernst von Weizsacker, Amory Lovins and Hunter Lovins, that looks at how future growth can be made sustainable through resource efficiency.

The book argues that since the industrial revolution, progress has involved increasing labour productivity and used yet more resources. It sets out a way that progress can continue by extracting at least four times as much wealth from the resource we use. The authors describe the process laid out as doing more with less, and a way of boosting sustainability.

The Club of Rome published the Limits to Growth in the 1970s, demonstrating the environmental impact of human activity and the potential consequences. Following on from this, Factor Four sets out a solution. It contains examples of how we can use efficiency while profiting with a wealth of examples, from food and water to transport and energy.

Following this path, the book argues the rewards of such productivity can also create more equality, because the benefits would be shared. The depth of research that went into producing the book is evident, with some surprising statistics, and the focus on solutions, rather than problems, makes for a rare optimistic perspective.