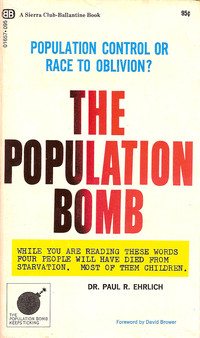 The best-selling Population Bomb was first published in the late 1960s and looks at the issues surrounding global population growth, in particular access to food, and potential solutions.

Author Paul Ehrlich argues that rapid population growth needed to be bought under control, with the growth rate being reduced to zero or even negative. The issues and what is causing them is looked at from an economical, political and religious point of view.

He looks at previous efforts to keep population growth at a sustainable level and suggests his own solutions. Whilst some of the ideas are controversial, Ehrlich presents his theories and the logic behind each in a clear way allowing readers to understand his perspective.

He makes a number of specific predictions that did not come to pass, which he has acknowledged, leading to the book being criticised. This included his assumption that population growth would outpace agriculture growth, resulting in mass starvation. The author maintains that the general argument in the Population Bomb remains intact and warnings such as his led to preventive action.

Despite the criticisms and some of the predictions proving incorrect with the benefit of hindsight, the Population Bomb is still a valuable book on sustainability. It offers an insight into the arguments and issues that the world was facing when it was originally published.

The message in the book that unsustainable population growth can lead to pressure on economies and resources remains as important today. It also successfully drew the attention of a wider audience to the related environmental and social issues.