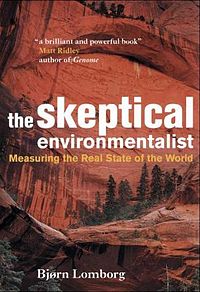 Controversial book The Skeptical Environmentalist looks at the claims around environmental and social issues such as overpopulation, energy resources, water shortages and climate change.

Bjørn Lomborg is a former member of Greenpeace who describes global warming as a “joy”. In a New York Times column from last year, he said that the developing world needed fossil fuels to survive.

In The Skeptical Environmentalist, he argues that environmental organisations make selective and misleading use of scientific evidence to support their cause. He points out examples of misleading conclusions that have reached the public and argues that an accurate picture is needed so that knowledgeable opinions are formed and the correct decisions are made.

The book uses statistical information from internationally recognised research institutes to examine and assess the major problems facing the world today. As a result, it is filled with facts, figures and charts.

The book often polarises opinions, with both critics and supporters speaking about the text. Critics have attacked the data and analysis Lomborg uses, disagreeing with claims that is a trade-off between solving climate change and addressing some of the world’s other major problems like poverty. Meanwhile, supporters have described the book as informative and welcomed the approach.

The book is split into six sections, which are then further broken down, allowing readers to easily find specific areas they are interested in, such as deforestation, energy and water. The summaries and structure of the book allows readers to skim read or look at a particular topic in-depth, with sources noted for further research and fact checking.

It is well written and explanatory without using technical language and being inaccessible. The book has had an impact on public policy debate and should be on the reading list of everybody interested in the environmental and social challenges in the world today – regardless of whether you agree with its conclusions.

Lomborg closes by saying that we need to take action to care for the planet – which very few people will disagree with.